One plus one usually equals two. In the case of Maria Grazia Chiuri and Pierpaolo Piccioli at Valentino one plus one added up to 11. But if anyone was worried that the breaking up of that phenomenally successful partnership now one half of it has gone to Dior would mean that one minus one now equals a big fat zero, don’t worry. The fashion universe hasn’t been disrupted.

Chiuri’s first Dior collection for Dior on Friday and Piccioli’s first solo one for Valentino today were reassuringly appealing. Chiuri, possibly, had the harder task, having to create a new signature for a venerable house, while Piccioli could continue along a familiar path. But both pulled it off.

Valentino gave us everything we’ve come to expect from the label with a focus on rich fabrics and quirky print/embellishment (courtesy of Zandra Rhodes). Silhouettes were soft as usual. That’s S.O.F.T. Forget stiff gala gowns and giant shoulders. These dresses from knee to floor length swirled gently around the body looking as comfortable as they were appealing with the waist either ignored or only subtly defined. 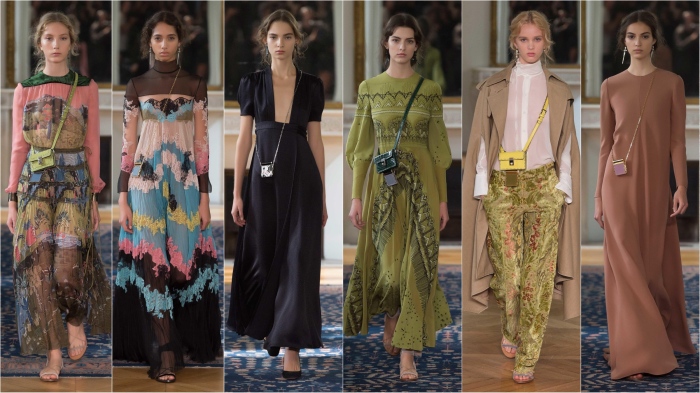 Colour and pattern really stood out as is only to be expected from a mix of 21st century Valentino and Zandra Rhodes. Power pinks combined with Valentino reds, muted acid yellows mixed with equally muted acid greens, and there were some grand colour understatements – slate grey sheers with power colour hems, sheer darks over acidic bases and pinks so pale they almost weren’t pink.

While Chiuri has always been strongest on print, Piccioli knows where to look for support here and got Rhodes to collaborate on “reinterpreting the vivid imagery of [Hieronymus} Bosch by creating signature prints,” he said. “Scenes from Bosch’s ‘The Garden of Earthly Delights’ are present throughout the collection. An incredible universe made of signs, symbols and stories.”

Dior: Has Chiuri aced it?

So Valentino is continuing on the path that helped its revenues onto a pleasingly steep upward curve. But will Chiuri’s latest collection do the same for Dior?

I’m not sure that those fencing looks will but perhaps they were more of a statement of intent than a serious style suggestion. It seems Chiuri wants to reinvent Dior (designed by a woman for the first time in its history) by widening the scope of what the house does. As Chiuri’s take on athleisure it was certainly interesting.

But more likely to get the cash registers ringing (virtually of course, who actually has a noisy cash register these days outside of the supermarket sector?) was the slightly more formal daywear and the after-dark pieces.

Chiuri drew on her own style as well as the signatures set by ALL of the label’s previous designers. “Monsier Dior only lives for 10 years. It can’t only be about him. In some ways I see myself as a curator of the house,” she told Vogue Runway.

That meant delicate tiered evening dresses, quilted leather jackets over the season’s clinical white dresses, slim cut Capri pants and sweet little knee length dresses (for all the Miss Diors out there), the bee motif previously used by Hedi Slimane at Dior Homme, a great black leather occasion dress, an even greater red carpet dress in rich red sheers, and a reworking of the Bar jacket and Dior polkadot.

Chiuri-style quirky scenic embellishment on knitwear and evening dresses struck a joyful note that generated plenty of applause at the finale.

But let’s not forget the smaller details like slogan tees, the underwear-style Dior branding on straps and waistlines and those small ‘clutch’ bags with chunky long shoulder straps that are all instant inspiration for the high street.

OK, these looks won’t turn fashion on its head and create a new way of dressing for 21st century women. But hey, this is Dior and Valentino. That’s not what they’re supposed to do. These are rich clothes for rich women, with influences that also reach into the more mainstream occasionwear, bridal and smart daywear markets.

But what they do both do is offer up a selection that can span age groups and taste levels and most importantly can give women clothes they actually want to wear and be stared at in admiration rather than pity or derision!

So, over a few days that have seen bare breasts, shoulders to scare an American footballer and some reinventions of venerable labels that made me think some designers are just taking the piss, Piccoli and Chiuri really do stand out. One minus one also equals 11. Phew.