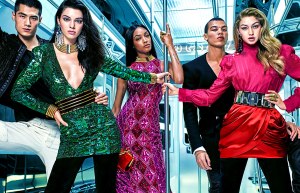 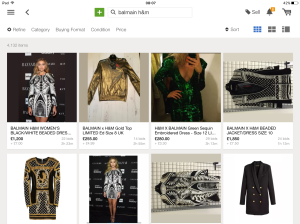 I read an article a few months ago in which a writer used lots of over-long words and rambling arguments to suggest that H&M’s Balmain collaboration was a bad idea and would be unlikely to succeed.

How silly must he feel today? Yesterday’s launch repeated the pattern of a decade with huge queues, shoppers grabbing anything and everything, and lots of people who just wanted to get one item leaving without the object of their dreams. The whole collection also appeared almost instantly on eBay at inflated prices.

But there were differences this time too. November 5 2015 was intense – really intense. In a moment of madness, I once queued from 7am outside H&M in Bluewater for the Marni collection. I was the only there for over an hour! But when H&M picks a label that does sexy with a capital S, massive queues, sometimes starting 48 hours before, are a dead cert.

So how intense was it this time? Well, fights broke out at the Regent Street, London branch, and the police got involved.

And the eBay effect? Key pieces are currently being bid into their thousands. In fact, if the winning bidders pay up, they’ll be paying more for items that are widely available and that will sell for a lot less in just a few months than they could for the high-end Balmain label itself. The same happened on resale sites worldwide with, for instance, Joonggonara in South Korea also listing items for more than double their original prices.

Does this make sense? Not really. I once bought a Balmain (the high-end version) leather top on Yoox.com for about £200. I’ve worn it roughly 100 times since so at a cost-per-wear rate, it’s a bargain.

H&M is aware of the unhappiness of some shoppers who didn’t get what they wanted.  It said on Facebook: “We are sorry to hear that our customers are disappointed with the Balmain x HM launch and for this we apologise. The interest for this launch has exceeded all previous collaborations, and we’re truly sorry if you’ve not been able to shop from the collection. We appreciate all customer comments and it’s valuable feedback for all future collaborations.”

We await next November’s collab with interest.

Of course, the big question is that if this kind of hysteria can happen on a wet Thursday in London, what’s going to happen across the UK, the US and more when all those Black Friday bargains are unveiled? We saw it last year. Let’s hope this year the violence doesn’t get out of hand.

One thought on “Balmainia hits H&M stores globally, eBay bonanza as prices go through the roof”