This is what Slimane did at Saint Laurent

You’ve probably already heard that Hedi Slimane is back at the helm of one of the big league fashion labels with news that he’s going to replace Phoebe Philo at Céline from next month.

But it’s not just a straight replacement deal. Slimane is known for his menswear as much as womenswear and Céline is a womenswear label, right?

Not any more. His arrival means the addition of menswear, and couture too, plus fragrances.

That’s big news on top of big news. Stepping into Philo’s shoes should have been a shake-up in itself, but the addition of new product categories will mean a major investment by LVMH in the house. 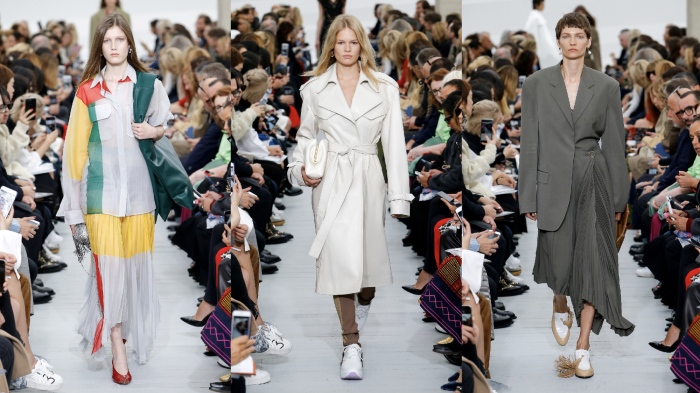 And this is what Philo did at Céline

What else it will also mean remains to be seen. It will certainly be interesting to see what happens at a label whose previous female-directed, often minimalist, aesthetic won many fans. Slimane’s womenswear at Saint Laurent had a more youthful, casually sexy, even trashy and headline-grabbing style.

So it’s sure to be an interesting ride. It may even be a bumpy one but it’s likely to be lucrative too. However much people criticised his Saint Laurent offer as being “too much like Topshop,” it sold and sold and sold. The label’s sales went stratospheric and made YSL Kering’s second star label after Gucci.

LVMH chief Bernard Arnault seems upbeat and said he’s “particularly happy that Hedi is back within the LVMH Group. He is one of the most talented designers of our time. I have been a great admirer of his work since we collaborated on Dior Homme. His arrival at Céline reinforces the great ambitions that LVMH has for this Maison.”

Hold on to your hats…

2 thoughts on “Hedi Slimane at Céline: Expect shake-up ahead”