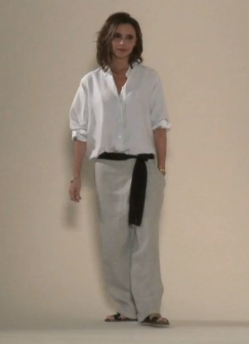 What was the best clue to one of the key trends for SS17 at Victoria Beckham’s show on Sunday? Was it the models or was it the pop-star-turned-serious-designer herself as she took her bow?

Actually, it was the latter. The woman whose career has been notable for ultra-minis, wiggle dresses and skinny pants appeared in a look that probably would have horrified her just a few years ago: a man-sized shirt (one of David’s perhaps?), a pair of stone-tone slouchy pants, a tie belt, and a pair flats. Oh, and she threw in bedhead hair just to get the point across.

It says a lot about a key direction we’ve been seeing in New York this week – volume, slouch and Casual-as-King (or should that be Queen?)

Not that the collection itself was all about those themes. Remember, Victoria Beckham has a client with a particular taste level to satisfy. But SS17 did mark a further step in her gradual easing of the silhouette.

For instance, the Dresses produced by beckham and her team came with godets, hints of asymmetry, or as soft rib knits, while skirts were ruched or came with paper-bag waists. And footwear meant flat canvas and leather boots rather than vertiginous heels. Not exactly a volume-focused revolution but certainly a giant leap into a softer direction for this label.

Elsewhere, team Beckham tapped into several key trends that we’ve been a lot of in the past few days: the white dress as a star item; the bra top as both an evening and summer daytime piece; the oversized statement sleeves; and he power of pure solid colour rather than the pattern that has dominated for so long with orange, lilac and a minty kingfisher made even richer by the used of crushed velvet.

We also saw wider pants (as well as plenty of skinnies), oversized slouchy bags, utility detailing like D-rings or giant fabric messenger bags (dubbed ‘pocket bags’ here), as well as ongoing support for the pleated skirt as a must-have in every woman’s wardrobe.

It all added up to a stronger offer than some of the label’s recent collections. Perhaps that shirt and pant combo she appeared in at the end was as much a sign of confidence as a trend direction… After all, you don’t need to be your own best model when you’ve created a collection that a lot more high profile women might want to wear.