Prada collections often divide into two categories. The sublimely perfect and unforgettable. The collections you can mention and everyone (at least everyone in fashion) remembers. Then there are those that are less enduring, that you struggle to reacll. Whether one sells better than another, Prada never actually says, but with the company struggling to get the growth it needs and actually seeing profits move into reverse, you’d expect it to aim for the former.

So what did yesterday bring in Milan? Well, it just edged onto the winners list if only because it was a welcome relief to the more-is-more ethos that seems to dominate so much high-end fashion at the moment.

Beautiful though so many other collections have been this Fashion Month, you can tire of too many textural contrasts, pattern clashes, layers of embellishment, and general extremes. By contrast, Prada was simple, accessible, and above all wearable.

Not that print clash was rejected as key pieces in florals were styled with other key pieces in checks. But in the real world away from the catwalks, nobody expects actual customers to buy the checked top and layer it under the monotone splashy leaf print dress, although they might mix and match the multiple checks as they may have clashed slightly but they also worked as a team.

What did it all mean? Who cares. It’s easy to over-analyse Prada shows. One review asked of this collection even asked whether it was a “suitable, appropriate response to the direst circumstances humanity has faced in over half a century.” But I’m not sure that’s the point. Fashion may be one of the world’s biggest employers but it’s still only fashion and shouldn’t be tasked with solving humanity’s problems (as long as it doesn’t add to them, of course).

So, the biggest takeaway from the show was the ostrich and marabou feather trims. At times they looked a little like an afterthought but in general they worked and added a soft element to the collection’s overall simplicity.

The second biggest takeaway was flat shoes. Yes, flat. Thank you, thank you, thank you. The models for the most part walked instead of shuffled in true flats, wearable height platform sandals, and kitten height heels (that’s real kitten heels rather than the three-inch versions that so many people refer to as ‘kitten’). At first glance the sandals looked a little like the bright plastic throwaways you might buy for a holiday and leave behind. But on closer inspection they were expensively detailed with floral patterned Velcro straps, colour blocked soles and uppers, that ostrich trim or contrast colour metallics.

And so to the clothes. Simplicity ruled for knee-length skirts, Chinoiserie pyjama-style co-ordinates (that unlike many their Fashion Month didn’t make the models look like they’d just got out of bed) and my favourite casual jacket of the season so far. It wasn’t a bomber, nor a studded biker. Instead it was a longer line casual, even sporty, piece in two-tone leather with rib knit cuffs, hem and collar and a further layer of colour via contrast patch pockets and fine piping. Tightly but casually belted it felt like a star piece and is likely to be widely imitated. 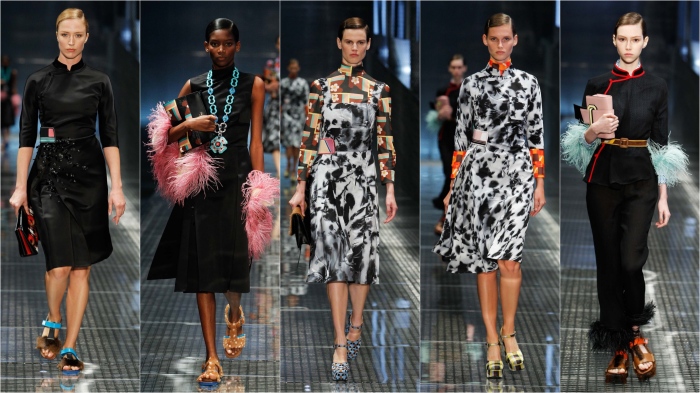 And the same is true for the all-important bags which are, after all, what this brand is hoping will pull it out of a nightmare scenario of plunging profits.

They were bi-colour carryalls with the zip extending into a trailing chunky ‘strap’ in a third colour, or envelope style, carried like oversized clutches with the elongated trailing central strap being the key design detail. The collection’s gently retro prints were repeated throughout, offering the Prada customer a compelling reason to update her existing bag.

And it has to be said that even though Miuccia Prada saying she and her team are sick of looking back, those bags had a gently retro edge, as did the sleeveless pullover tops, the giant medallions and the 70s kitchen wallpaper floral prints. But in spire of that, the overall feel was more modern than so many collections that have trod the runways so far this season. Here comes the wishlist…