You have to feel sorry for knit buyers. Their season is on a make-or-break knife edge with he rather frequently not playing ball. After all, nothing makes consumers want to buy this autumn and winter essential more than plunging temperatures.

Drop knits in-store too early and they sit unloved on the shelves until the temperature eventually dips.

But this runway round, designers seemed to say to hell with he weather as they served up ideas for season-round knits that cam also fit neatly with just about every look in a shoppers’ wardrobe.

Early in the season and not quite sure whether it’s knitwear weather yet? Well given that new season pieces drop at the height of summer, that’s no surprise. These pieces are big on transitional appeal so they work when ‘cool’ is more state of being than a celsius reading. And they hint at the retro-influenced looks coming later in the season when full knitwear weather hits. Think skinny, short and focused on sleeve silhouette detail, helping consumers morph from summer’s sleeve-focused shirts and blouses into the new season.

Is it getting chilly in here?

As temperatures dip, all over knit dressing becomes an option. But avoid heavy knits (it’s not that cold yet, after all). Think long tunic sweaters worn as mini dresses or overlaid with sheer overdresses (designers were big on sheer and lace layers this time round). Soft, fine-knit co-ords also tick the trend boxes in acid brights or neutrals. Plenty of designers also opted for the season’s favourite asymmetric themes but this needs to be kept under control to make it wearable. 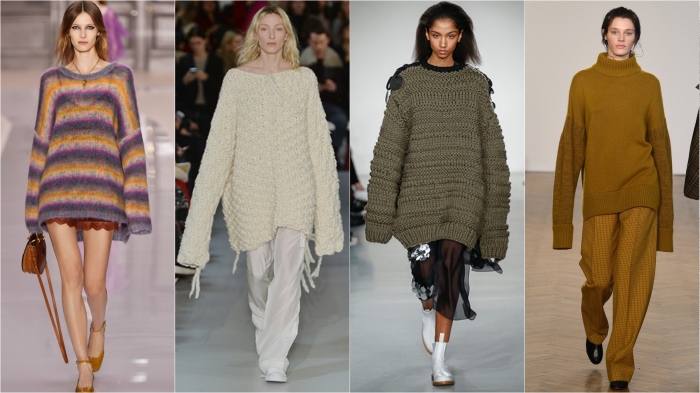 The new season will be big on slouchy knits and they’re perfect for welcoming in September’s cooler climes (as well as October’s, November’s and even December’s). These sweaters double as dresses at their longest and will look great with AW17’s over-knee, buckled or super-slouchy boots. Opt for chunky ribs and airy-but-still-cosy mohairs in single tones or ombré stripes. But worn slightly shorter they’re the perfect layering piece with boots and jeans for the coat- and jacket-phobic.

As thoughts turn to the Holiday season (whether Thanksgiving, Hanukkah, Christmas or more) then knits can move from slouchy to dressy and AW17’s retro-influenced offer works perfectly for this. It doesn’t have to be all about spangles and sparkles (although that’s an option) as short, neat knits in traditional patterns, just like granny used to make, work as well with party separates as with the daywear pieces we’re more used to. But you can also take knits into complete after-dark territory, like Prada, which mixed beading with fuzzy fibres and power colour for cocktail-ready looks that will certainly keep out the chill.

Ok, we all know January is a depressing month so AW17’s patterned knits can help chase away the gloom with pattern play that’s perfectly in keeping with the season (anything too spring-like just won’t feel right). Stripes, check geometrics, traditional knit motifs and animal designs work in a variety of understated tones or blended brights. It’s a direction that can work as well for brightening up core volume pieces as much as on-trend knits, and with a tweak to tones and weights, can carry a collection through to the pre-spring.

The runway knit offer included plenty of outerwear options, from the cardigan that could double as a coat to a cardigan that’s all-coat. And there were some interesting jackets and coats with knit panels stitched-in too, adding a new dimension to shearling or woven woollen outerwear. The key is to focus on heavy yarns, textural knits and roomy but not oversized silhouettes that won’t swamp the wearer. 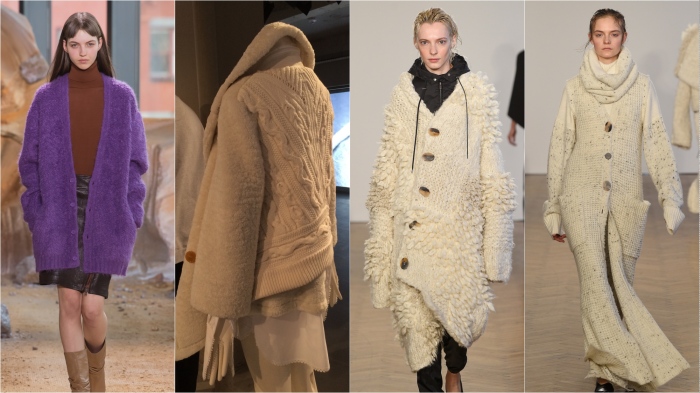