A coat used to be a big deal. It was something made of wool. It was smart, even in its most directional form. And it was a major investment every winter. or every winter that you could afford…

But that was then. And today? Recent years have seen the smart outerwear sector nosediving as consumers went casualwear crazy, leaving traditional coats on the rails. And it’s not just that we’ve all fled to the comfort and ease of parkas and puffers. Just think of the number of mainly young women wouldn’t even buy one of those and prefer a combination of layers, scarves and a biker or bomber rather than anything vaguely resembling a coat. It’s really not an encouraging picture if you’re a coats buyer.

Which is why the current catwalk obsession with ‘the coat’ is so out of step with reality. Not that the catwalk cares. Those runway labels only have to make fashion that their customers will want to buy and let’s face it, their customers for the most part have lives every different than the mass of consumers.

You only have to look at the street shots from Fashion Month to see this. Yes, there were plenty of cool (traditional) coats seen on the backs of street style stars (especially outside coats king Dries Van Noten’s show) but two hours later they’d be in cotton shorts or or some other item that paid no attention to the weather.

And their lack of practicality was echoed on many catwalks. Much of what we saw in the Big Four fashion cities just won’t make it through to high street level.

But there were some ideas that do have a life outside of the rarefied world of the runway to ring the real-world changes for the autumn season to come.

Sharp tailoring, fuzzy or furry trims, and the importance of pattern play from traditional checks to floral, collages or traditional patchwork all made an impact.

Designers take peacoat shapes and cut them in heavy cottons as well as woollens, dressing them up with fur trims for a style that looks youthful (but appealing across a wider age range) and casual enough to tempt anyone out of their parka/puffer. Chloé’s shirt-coat in heavy plaid wool should achieve the same effect. For puffer fans, the duvet coat evolves into a festival of pattern (looking best in on-trend leopard or florals), while quilting is a transitional alternative. And if consumers want to opt for a traditional coat silhouette in more dressed-down materials, corduroy is a directional choice.

The shorter coat is a way for designers to play with ‘traditional’ styling while appealing to a youthful taste level and the consumer who wants something to wear to with jeans or the season’s longer boots. Traditional checks neutrals or winter brights keep them simple but striking. 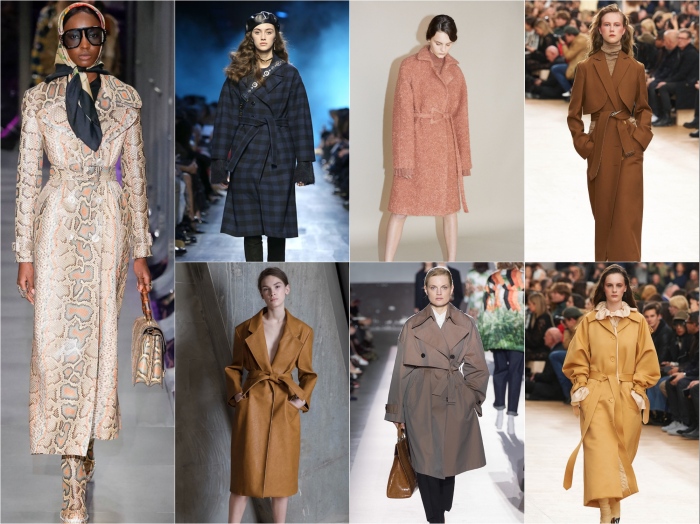 Looking strong for transitional coats, the classic trench or tailored coat with a self belt proved popular on many runways. Designers have cut many of these coats ultra-slim and long, but perhaps a more practical (and commercial) option is a roomier cover-all coat that can be worn cinched or loose depending on what’s being worn underneath.

Fur is major outerwear story for AW17 but the days of the classic fur coat are long gone. Fur is used as a textural statement all over but more interesting is fur used as accents and to add  a fun feel via fuzzy texture. At a  commercial level, faux fur oversized collars and hem trims, sleeves and panels can be used to drive existing silhouettes into a brave new season.

The mannish tailored coat was a popular feature across all four fashion cities but will it sell? As an ultra-classic investment piece in classic woollens, designers might convince us to part with our cash. But some are trying to add extra trend interest and an extra reason to buy with sheen, wider shoulders, or perhaps an exaggerated curve to a sleeve. Of course, if a consumer already owns a coat like this, chances are there’s not enough to make them upgrade, so this one may struggle to gain traction without an extra edge…

…which is where pattern power comes in. Plenty of designers dressed up their mannish tailored coats with embroidered florals, which adds instant trend appeal to the cut. Others took the love of pattern further with plenty of panelled or collaged effects and more than one celebration of patchwork. 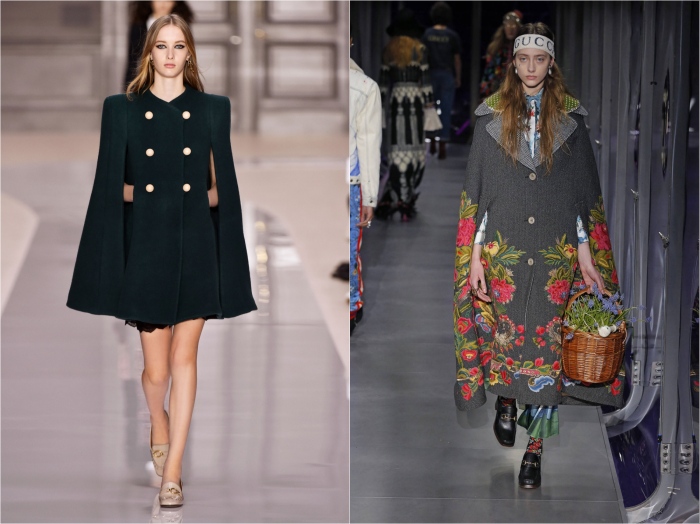 Capes are a regular feature on winter runways and Gucci’s Alessandro Michele is a big fan. Will they hit the mainstream? Unlikely. But Chloé’s navy blue cape with squared off shoulders looks just commercial enough to earn a place in a few coat collections come the autumn. 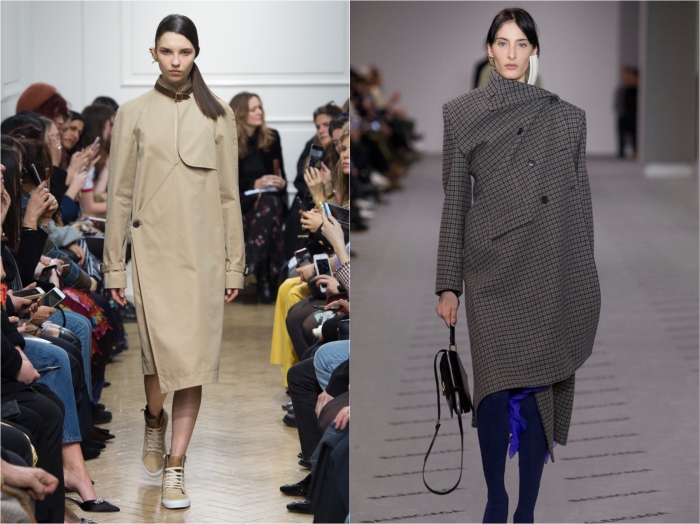 Designers embraced asymmetry this season, ignoring its obvious lack of practicality. Balenciaga’s coats may have been largely about making an extreme styling statement, but they summed up just how popular asymmetry was this Fashion Month. If you want a more commercial play on the look, channel JW Anderson’s take on the theme for a coat that can be worn fastened but won’t drag through the dirt if the wearer decides to unbutton it.