Alexander McQueen showed on Monday with Sarah Burton offering up a much more wearable vision than you would expect from the label. A brand that was once known for its over the top eveningwear offer is gradually turning itself into something that women can wear for their everyday lives, albeit as long as those lives involve boardrooms, cocktail parties, the occasional visits to a luxury yacht, and anything else that the wealthy tend to do with their days (and nights).

And with lots of designers lining up to maybe replace Phoebe Philo in the ‘cool clothes for grown-ups’ part of a woman’s wardrobe, maybe Burton is in the running?

Well, not quite, but Alexander McQueen is getting there. For AW18, the label offered up a vision of autumn/winter dressing that was really quite practical, looked good, and felt like it would be fun to wear.

Not that there weren’t some excesses. One tuxedo piece with added OTT pink taffeta cap sleeves (or where they wings?) really did go from sublime to the oh-so-very ridiculous.

But let’s focus on the good stuff as there was a lot of that. Tuxedo dressing was the headline news. The tux line-up came teamed with both skirts and pants, and lace inserts added a lightness to some. They had shoulders that were defined but not over-exaggerated, and nipped-in waists to define the female form.

And just as suitable for life away from the red carpet, we got shirtdresses too in striped shirting, curvy coats finished with blanket-style hems, and the all-enveloping blanket wraps that are a feature of this seasons collections. 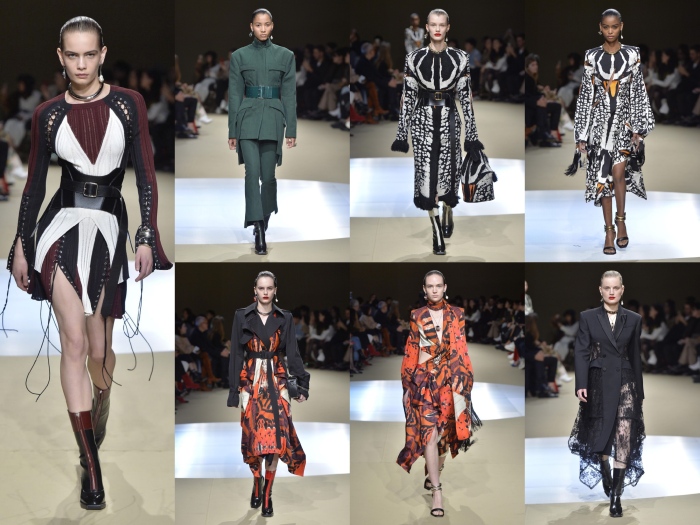 The biker jackets that have always been a feature of Alexander McQueen were there too. But the concept has been extended to take in dresses with biker detailing. Outerwear borrowed from the biker theme as well with an interesting leather coat that could be deconstructed via its series of zips.

Of course, this is one label known for celebrating curves and we had plenty of that with corset belts, fitted dresses for day or evening, and even a tightly belted trenchcoat complete with a signature Alexander McQueen print.

In fact, print resurfaced throughout and kept the collection securely anchored in the McQueen style to which we’re all accustomed.

So it was a mix of the familiar and the unexpected and it’s a testament to the way Burton is developing this label that’s the aforementioned pink confection was the only place that really could be criticised.

And also praiseworthy it was her use of a diverse selection models. Not only was the diverse approach focused on ethnicity, but the models came in several shapes, sizes and ages rather than the usual 5 foot 10, 18-year-old size fours. Result!