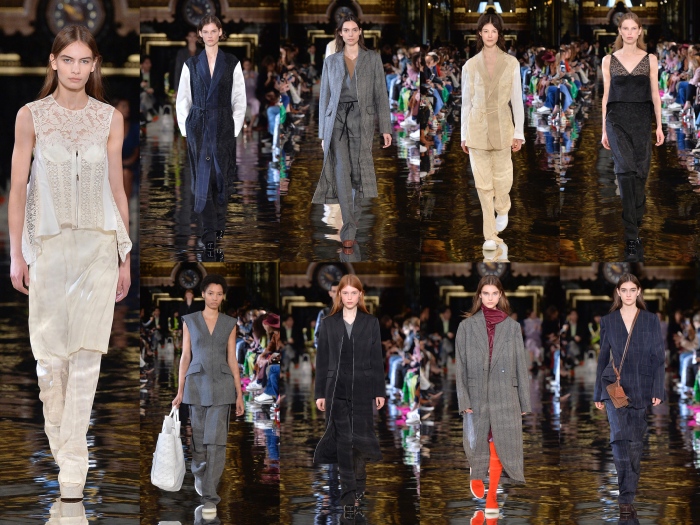 If reports are to be believed, Stella McCartney is planning to buy back the half of her company that she doesn’t own from partner/backer Kering and go solo. That’s a huge step in the modern luxury sector where brand ownership is nowadays more often about megasized conglomerates.

So did the collection she showed in Paris yesterday look like one that could carry a brand all its own? Maybe. Maybe not. It was actually fairly low-key, no grand statements, although sustainability and an animal-friendly focus were never far from the surface.

Overall the look was dressed down, casual, relaxed, with ‘ease’ being the keyword. No cinched waists, gravity defying heels, shoulders too wide to squeeze through a doorway, or gratuitous displays of flesh for Ms McCartney.

The big headline of show was the print story with prints based on the art of JH Lynch. And for those of you don’t know the name, anyone alive in the 1960s would recognise it as most of us would’ve had one of his pictures on our wall. And of course he’s enjoyed a revival as younger lovers of kitsch have also added his artworks to their living spaces.

Unfortunately though for Stella McCartney, her use of his imagery did seem a bit too similar to a Prada collection of a few seasons ago when that label opted for Italian Cinema Poster Art.

But ignoring that clash, the prints certainly made an impact, although, as already mentioned, the collection itself was fairly low-key. Texture seemed to matter more than print as subtle patterns such as the fine lines of a herringbone tweed or subtle self-patterns were more important. And a palette dominated by greys, blues, white, neutrals backed that up.

So what about silhouette? Occasionally slim but never figure-hugging, occasionally wide but never ultra-voluminous, it was built around easy pieces and non-bulky layering. Fluid pants came under a soft skirt and an equally soft top, while faux layered slipdresses, and other faux-layered pieces, added a point of interest to a silhouette that skirted the body rather than defining it.

There were plenty of the season’s key pieces, such as the masculine overcoat cut in generous proportions, slouchy knits teamed with sheers, flowing dresses, gathered silks, blanket wraps and fuzzy fur textures (and in the case of Stella McCartney, we never find ourselves having to ask whether it’s real or faux).

Back to the original question of whether this collection could carry an entire label, after thinking about it, I’d say not. There’s plenty to wear but not so much to get really excited about. But then, you don’t judge the commercial value of Stella McCartney just by one season. Her customers buy into a wider concept that speaks volumes: these clothes are for women by a woman and no animals have been harmed in their production; these clothes are to wear not to pose in; these clothes are just that – clothes – and however many art references they include, that’s really the point.