Fashion in the 20th century was one long story of casualwear. Whether it was the fashion freedom of the Jazz Age, WW2’s functional fashion or the post-war rise of the denim industry, occasional steps backwards couldn’t stop the onward march of the causal.

But that’s not to say Casual was King. For large parts of the century we were forced to formal. Women were banned from wearing trousers in offices and girls from wearing them in schools. For most of the century men had to ask permission to remove their jacket in the office (let alone their tie) and even this year, a temporary worker was sent home from PwC for not wearing high heels! 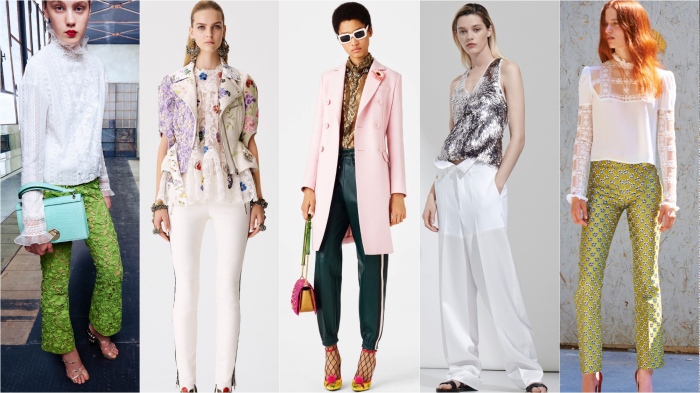 But that latter blip aside, the tidal wave of the casual movement has become just about unstoppable. It’s not only changed the way we dress but the way we think about clothes too. An ex-colleague of mine used to joke that I dressed for work as if I was going to a cocktail party… and I did. But today I choose comfort-focused pieces and I’m one of millions of people who do the same.

The fashion sector has embraced this, of course, so that the old rules of high-end fashion no longer fully apply. Red carpet gowns and daywear for ladies who lunch are so over, especially when it comes to the pre-collections and Resort 2017 has been big on casual.

It’s been big on ‘formal’ casualwear too. OK, it’s not new. Just think of the après-ski looks of the 50s and 60s to discover its roots. Watch Claudia Cardinale in the original Pink Panther movie… that white Galitzine embellished ‘pyjama’ sums it up.

So what does formal casual wear circus 2017 mean? Lace and brocades used in top-and-trouser combos with a dressed-up-but-dressed-down feel. Or casual key items like vests and tees are citing in luxe fabrics to add extra gam appeal to the most casual looks. And formal-informal contrasts for careerwear too as track pants are teamed with smarter pieces to avoid contravening office dress codes while still offering up a strong dose of sportiness.

For less formal daywear, think of it as Dress Down Friday that’s been extended throughout the week.

That means track pants, leggings (either standalone or a return to them being worn under skirts) and panelled neoprene scuba-style tops to add not just comfort but ultra-comfort to daytime looks.

And New Casual doesn’t have to be so obviously sports-influenced. Patchwork denim, easy pants with soft blouses, logo sweats and tees, knit separates, shorts, bomber jacket-and-skinny pant combos… they all offer a relaxed approach to dressing that are a dead cert to fit today’s more liberal dress codes. 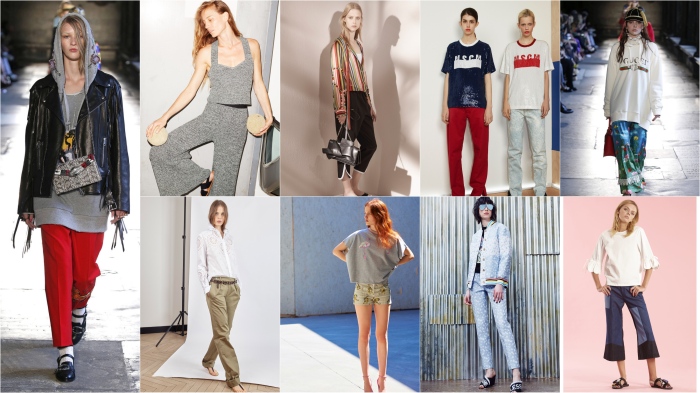 Of course, it helps when fashion’s biggest names get behind a trend and this pre-season Gucci, Louis Vuitton and Prada certainly have done. The Prada collection is particularly interesting. It’s a colourful, sporty-meets-outdoorsy series of separates, shoes and accessories that look robust enough for hiking but could also work in a too-cool-to-care after-work social scenario.

Given that this is Prada, it’s no surprise that the shoes and accessories are the stars of the show. Those backpacks should make an impact and the sandals and scuba boots complete with floral trim and colourful floral pre-formed soles are likely to figure on plenty of wishlists in a few months’ time.

The collection’s outerwear has also struck a chord and synced with a wider trend towards casual outerwear that’s another sign of the casual direction fashion is following. The fact is, designers can offer up as many tailored coats as they like but it’s hard to tempt us out of our parkas and puffers and some of them have given up trying.

The biggest outerwear statements this pre-season come from colourful windcheaters, cagoules, endless variations on the parka (reinterpreted with embellishment, in traditional or unusual materials, printed or plain, dressed down or semi-smart).

It may all feel like the end of the world if you’re a fan of the more formal. But consumers have got used to their comfortable shoes, practical coats, easy-but-attractive separates and carry-anything backpacks. Why would they want to give them up?