Theresa May, Angela Eagle, Hillary Clinton, Nicola Sturgeon, Angela Merkel, Andrea Leadsom. I don’t know about you but it feels to me that while 2016 is turning into a nightmare year politically, it does have one upside. And that is? The way female politicians have not only come to the fore but look likely to be running large parts of the world in a few short months’ time.

Female politicians have always stood out come the final photocell after G20 or EU summits simply because there are so few of them compared to men. But now? There’s definitely change afoot. 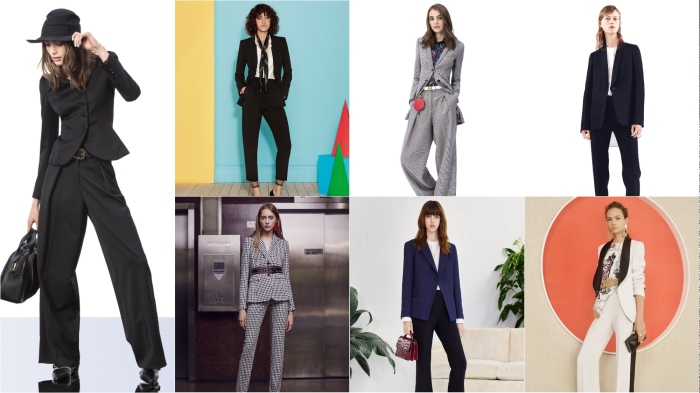 OK, what’s that got to do with fashion? Not much. After all, politics and fashion usually make uneasy companions.

But the pre-collections that have been trickling out for two months now and given that they’re so much more commercial than main season collections, they contain plenty of good ideas for anyone looking to escape the regular female politician fashion straitjacket.

Alongside all the embellished denim, sequinned parkas and boho dresses, there have been plenty of the kind of looks that powerful women should be (but rarely are) wearing. If I see one more jacket with a slim cut shift dress or pencil skirt, I think I’ll scream.

Cue the much-maligned pantsuit and some great statement tops. A pantsuit plus a powerful woman can add up to one giant cliché but the new breed (of pantsuits, not powerful women) veer far enough from the boardroom norm to feel on-trend. They’re crisp and colourful, slim and feminine, cut to emphasise the waist rather than hide it, and exuberant in power stripes or florals and brocades. OK, I can’t quite imagine Angela (Merkel or Eagle) in a floral pantsuit but something in a key colour (power pinks and reds, burnt oranges, blues and greens) would look great, as would a jacket with a statement silhouette.

Such jackets this pre-season often come with pants that are almost legging-tight. Not that I’d recommend that option for any MP seeking out hardworking clothes to take them to the top. But a slightly looser (while still slim) cut or wider, fluid pants work well and are so much more interesting than a knee-length pencil skirt.

What to wear with them? The smart money this pre-season is on a crisp cotton shirt or a blouse that may be cut in soft silk but as it avoids the OTT decoration, frills and lace trim of many of the season’s blouses, it probably fits more comfortably in the shirt category.

As well as working with a pantsuit, these shirts also like to hog the spotlight. With the focus on the sleeve, a giant gathered pirate shirt sleeve or a flared trumpet shape mean these sleeves are made to be seen rather than crushed under a jacket.

For a dressier alternative to the shirt (for post-election cocktails or fundraising galas), the peplum top is a conservative-meets-trend staple. Working with both skirts and pants, the peplum part-top/part-jacket can go from the House to dinner with ease. Cut in lightweight or sturdier shimmering silks, or as an extended shell top, it’s a full-on evening piece without requiring the commitment of an evening dress.

Yes, this is probably all fantasy-land – right wing politicians tend to prefer corporate style while left wing politicians don’t want to be seen to be too interested in fashion. The fashion stuff is usually left to political wives with Michelle Obama and Samantha Cameron filling the suporting-the-industry-while-doing-good-works role with great skill at the moment.

But in a few months’ time they won’t be doing that any more. And if, as seems a strong possibility, women are at the heart of power rather than just being married to the man in charge, the way they dress is going to be under intense (and unfair) scrutiny. The idea that you can’t be ‘serious’ and interested in your appearance at the same time is frankly rubbish. So remember, if you’re a leader-in-waiting, the fashion industry will be happy to help.

3 thoughts on “Change for the better: Politics, power, panstuits and peplums”