Mulberry’s turnaround is still a work in progress so the impact its runway collection makes is a big deal. Last season, Johnny Cocoa’s debut didn’t exactly see the champagne corks popping. But yesterday in London he got a thumbs-up, albeit a conditional one, for the continuing evolution of his new vision for the label.

Coca is Spanish and having landed at Mulberry after time spent at Céline, it might be expected that he’s not exactly in tune with the army of ‘middle-England’ women who’ve loved (and bought) Mulberry for decades. But then Mulberry is an international brand and simply appealing to your regular clientele isn’t what’s going to grow sales in the US, or China or Europe.

So Coca brought in Russia’s Lotta Volkova, known for her work with Demna Gvasalia at Vetements and Balenciaga, to style the show while he and his team came up with a collection that bore traces of his Céline roots given that it was more stark, less easily accessible than we might expect from Mulberry.

Not that this is a bad thing. A few pieces weren’t so great but in general it was wearable, deceptively simple and really quite commercial. 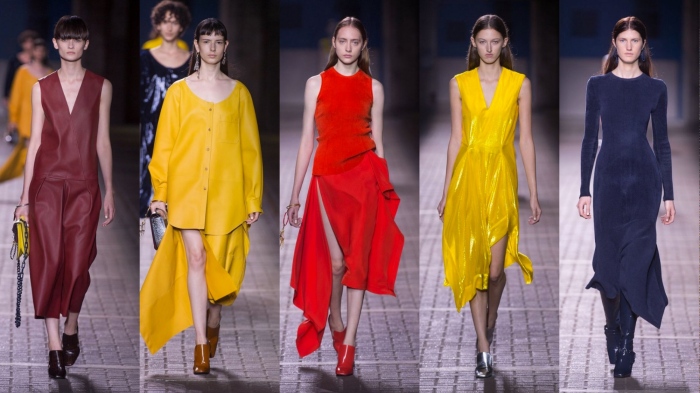 But more impressive were the daytime pieces like the tunic dresses, asymmetric hem skirts,  the simple leathers and shirting. Also looking strong was Coca’s reworking of traditional British striped blazers and extension of the stripe onto shirts, skirts, dresses and even shoes.

Of course, this being Mulberry, the bags will be the items that really sell. And for SS17, Coca expects women to want big, big, big or really quite small. Giant totes came in squashy (but not soft) leathers while smaller bags were boxy and zipped, envelope style with chain straps or heavily studded.