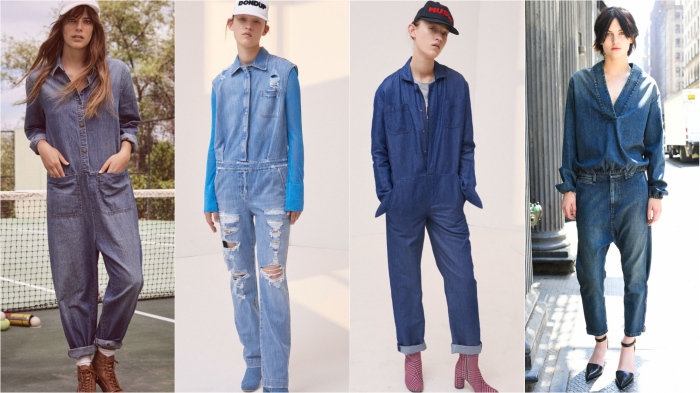 Designers have fallen head over heels in love with the denim all-in-one for pre-summer (resort) 2018. The versatility of this key item means its likely to be a keeper and could morph smoothly into the spring/summer 18 collections too. We’ll know pretty soon whether it does as they’re just a scary six weeks away.

So what’s the story for pre-summer? (Almost) anything goes. While the words ‘denim jumpsuit’ might sound a bit restrictive for anyone who doesn’t want to dress like an extra from the workshop scene in Grease, it’s really not.

That’s not to say the Rosie the Riveter look is out of the question. Enough designers have taken the overall back to its workwear roots to make it a key piece of this trend’s jigsaw. These overalls really do look like masculine workwear with few concessions to the female form.

Whether in distressed or pristine denim, chambray or any one of a number of denim-look materials, the focus is on functionality and comfort. The newest versions come defiantly unbelted, but we all know that lots of wearers will find that a step too far and will pull them in at the waist with one of the season’s cincher, corset or skinny belts.

The big opportunity for feminising the look that’s been embraced by Dondup and The Great is at ground level with legs rolled up or cropped so they overall can be teamed with heels (or kept ultra-mannish, it’s all up to the wearer).

Girly girls can have fun too if they want to take the denim all-in-one into sweeter or sexier territory, with a closer fit being key here. Balmain has mixed its signature sexy edge with its rock chick credentials for a bustier style that makes the most of frayed edges and figured denim to define the female form. But Balmain would do that, wouldn’t it?

Less aggressively ‘sexy’ is Re/Done’s version that channels a kind of 70s Charlie’s Angel style. Back in the 70s, the look would have been all about big hair, lip gloss and cleavage. And that’s all fin now too. But it can be key a bit more low-key too for a look that’s confident in its feminist without having to ooze sex appeal.

Or you could go ultra-girly. Sea has tapped into the current frill craze for a style that’s youthful and about as far from masculine as it’s possible to get and works well as an after-dark option.

And anyone looking to move their dungarees on has plenty of options too. The fitted standalone of a few seasons back has been replaced by a key item that’s loosened up a bit (or a lot) and can be worn over one of the season’s statement blouses or knits. But with some new-season detailing (think frills or strategic embellishments), it can still hold its own as a standalone piece.

It’s all part of a whole suite of denim pieces that designers have given us for pre-season and with double or triple denim still a valid choice, these jumpsuits are vying out to be tamed with roomy denim jackets, shirt jackets or parkas.