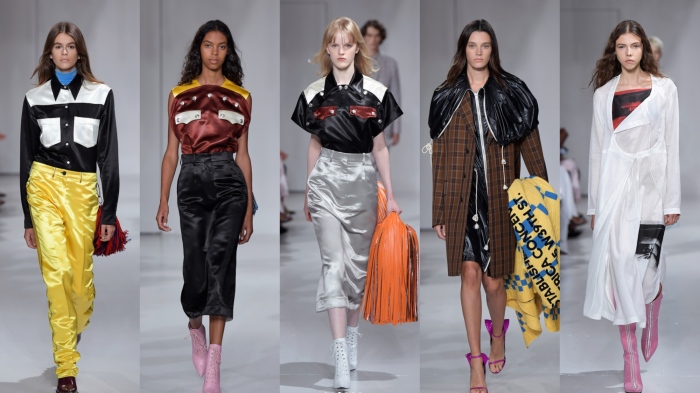 Raf Simons and Pieter Mulier were expected to shake up Calvin Klein and they certainly have, from the advertising to the stores (that’s an ongoing project) to the collections at all price levels.

That was most visible Thursday evening as we got more new-style Klein, with a distinct break both from what came immediately before.

But for a minute there it actually looked as if it might be more of the same. The AW17 show had delivered a big jolt back in February. But the first SS18 models strode out dressed in almost the same look as SS17’s.

Re-coloured and made in satin, they may have been, but the casual observer could have been forgiven for thinking that the most interesting element of the show would be the fact that it was the catwalk debut of Cindy Crawford’s daughter Kaia Gerber.

Thankfully, it moved on fast became clear that this collection was full of strong commercial ideas that could really make an impact for the brand as well as inspiring retailers further down the fashion food chain.

I liked it. Whether I’d have felt quite so enthusiastic if it was an unknown designer battling for recognition is a big question. A famous name attracts attention to a collection and can drive you to take more notice of it than you otherwise would. But that’s not really the point, this was Raf Simons and Calvin Klein. It’s big news. End of story.

So what was so appealing about the collection this time?

AMERICAN DREAMS (or nightmares). The Americana influence was key. But it was a lot less predictable than many interpretations of this theme over the years. It was quirky to say the least, from the ‘western’ shirts in unexpected colourways, to diner waitress uniforms, the slick nylons and crisp cottons traditionally used for tents (Simons’ play on American teens camping in the woods), and the collaboration with two examples of American pop culture. The brand worked with The Andy Warhol Foundation and Hopper Goods with Warhol’s artworks brought to life as silkscreened graphics. That meant the macabre electric chairs and car wrecks of his Death and Disaster series, or intimate portraits of his muses, like art collector Sandra Brant and Dennis Hopper, the counter-cultural driving force behind Easy Rider.

THE DENIM. Once upon a time nothing came between Brooke Shields and her Calvins. But there’s lot more designer denim out there now so brands have to work harder to differentiate themselves. Embellished denim, or the distressed/devastated variety, is still big news so you need something offbeat to make a difference. Those simple jackets and jeans wouldn’t have made much of an impact on their own but the prints that looked like they’d been applied with a paint roller were a gift to the high street.

VOLUME. We may still live a world where the skinny jean is king (or queen) but a loosening up of silhouettes is being widely seen both at designer and high street level. This show took that further with giant coats that were cut for volume but also given interest with paint splatter prints or drawcord detail. The statement dresses used metres of fabric to ram home the volume message and some almost-ingenue (except for the slightly disturbing prints) dresses referenced nightwear, although this was more boardwalk than boudoir because of those aforementioned prints.

SHEEN. From the satin shirts, pants and skirts, to the slippery synthetic dresses, and the softly sheened rubbery coats, the collection’s lustrous edge was less about the traditional glimmer of luxury and a bit more street. It felt new, and in a world that cries out for newness but sticks stubbornly to silhouettes that feel familiar, it’s a way to ring the seasonal changes without being too scarily different.

COLOUR. Spring collections to often go pastel and summer ones go tropical. Here, instead, the colour was a powerful mix of 50s influences with some dark brights (if that makes sense), along with fresher, sunnier tones and regulation, black, white or grey. If you want to wear red next season, yellow, pink, muted orange, teal, forest green, a range of blues and many more shades, the world is your oyster.

FABRIC AND DETAIL. The exaggerated pompoms, drawcords that helped define to the silhouette, visible zips, bifurcated pants, blood splatter prints, contrast yokes and pockets, skirt yokes, gathered necklines and straight to the point “Made in Ohio, Industrial Dip Molded 100% Nitrile/Synthetic Rubber” prints meant there was plenty for the high street to tick off on their inspiration checklist. And that use of rubber, plus other unexpected fabrics, summed up the creative approach to materials. The label has stepped away from luxury’s usual obsessions with traditionally luxe materials and set out to offer up a collection that said something different.