LVMH’s fairly non-committal pronouncements on how Marc Jacobs is going aren’t exactly designed to engender confidence in the brand’s future. And that confidence has been severely dented in recent periods as rumours have swirled around the man who is undeniably on of NYFW’s biggest influencers, from Jacobs quitting, to the company being sold and the imminent cancellation of this season’s runway show.

Understandably, Jacobs has been get pretty pissed off about all the speculation but it doesn’t seem to have affected the creative focus of his company. In fact, the latest collection felt stronger than any have done for a while. And for the first time in several seasons, it also didn’t feel like the mix of the higher-end Marc Jacobs label with the pieces that would have been part of the now-defunct Marc by Marc Jacobs line wasn’t quite working.

The show itself yesterday was interesting. Models walked the runway in silence, with the usual music that gives fashion critics the chance to try to decipher the designer’s hidden meanings being kept for the finale only. That meant the clothes, shoes accessories and, of course, the models, were the big focus. And those models were much more diverse than some previous shows with Jacobs clearly determined not to fall foul of any social media storms for not promoting diversity this time round. They also had a good selection of the biggest established names such as the Hadid sisters, Kendall Jenner and Kaia Gerber (with mum Cindy Crawford sat front row).

So what were the big stories? Volume, sometimes kept under control by nothing more than a loose belt for pantsuits, raincoats, jumpsuits, bikers, cardi coats, and sheer dresses.

Colour, taken to tangy and searing extremes with oranges, pinks, blues, green and more contrasting with starkest black and white. Print, with the brand’s signature daisy or oversized graphic florals taken to a point where they almost didn’t look floral. 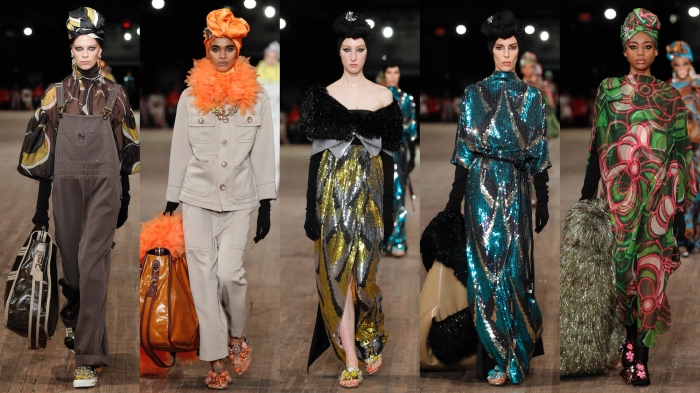 Beading, acting as standalone statement with tops that were essentially made of beads and nothing else, or allover sequins making eveningwear shimmer.

Flat slides for the most wearable footwear options or shimmering fringed mules looking like the wearer has gathered the leftover decorations from a beachside cocktail.

Utilitarian bags from typically tourist belt bags to zippered crossbodies and roomy holdalls that acted as a surprising contrasted to the depth of detail on the shoes and clothes, even though the bags also came in the collection’s power colours and sometimes its prints.

And a retro edge that channelled Jacobs’ grunge-infused past as well as his love of 50s/60s looks (the capes, wool coats with fur or feather collars and the jet set dressed-up looks).

The words Arabian Nights figured in more than one review of the show and the Stephen Jones turbans plus the harem pants, the almost-caftan dresses and the prints certainly took the collection down that particular path, although it definitely didn’t stray into costume party territory.

All in all it was a good collection, one that pulled the curtain down on a generally uninspiring NYFW and cemented Jacobs as a continuing big draw on the New York schedule.

It may not have been his best ever, but it showed that his label isn’t the spent creative force that the rumour mill had suggested. Whether it propels the brand to the kind of sales that LVMH would like remains open to question. But there were certainly plenty of ideas that the high street will be poring over as I write. 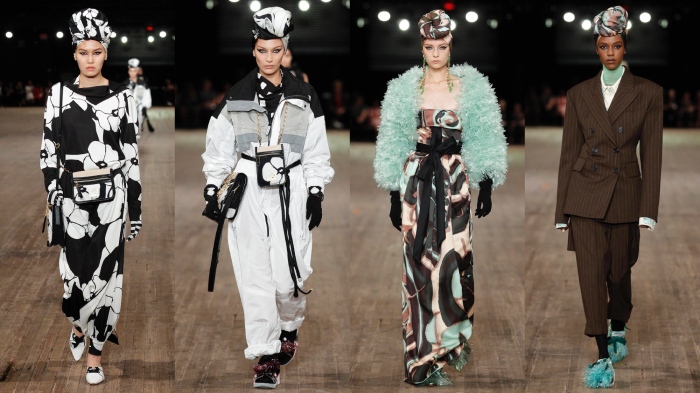