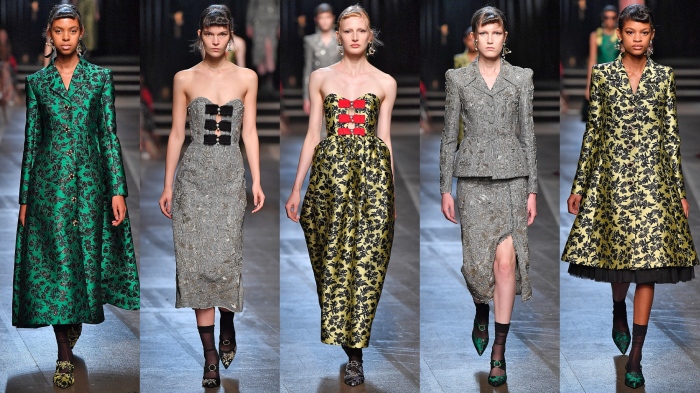 Erdem’s show on Monday offered up a vision of evening dressing the was pretty darned perfect. Channelling the 1930s and 50s, it wasn’t something that the high street could instantly pick up and remake, but there was plenty in there to influence the after-dark and wedding market.

And coming just ahead of Erdem’s H&M collaboration, we’re talking about a label with a profile that’s set to rise worldwide come November. But Erdem seems to be doing pretty well at winning fans by his mainline work alone, without really needing the high street.

There were plenty of current trend boxes being ticked for this collection – from the wider shoulders on Prince of Wales check coat dresses to puffball skirts, layers of ruffles, the use of silver, and the season’s slightly girlish silhouette that flares from just under the bustline, ignoring the natural waist altogether.

As well as trends, this was as much about a personal vision of Erdem for his customers. And that vision came courtesy of the Queen. Yep, he’s been doing research into the royal wardrobe at Windsor castle no less. 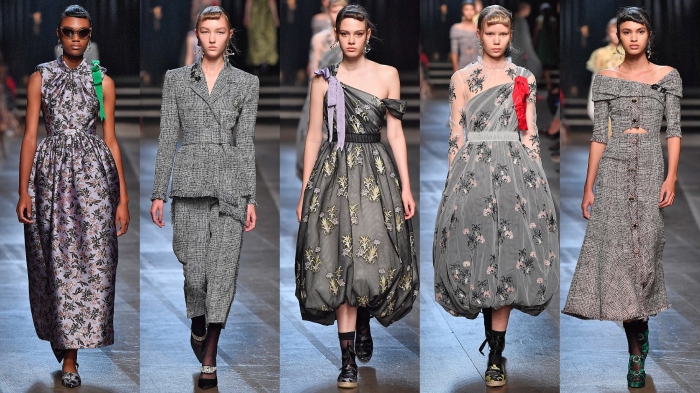 But in case you think he’s been carried away on a wave of royal reverence, he’s looked for inspiration in Harlem’s Cotton Club of the 30s too with Ella Fitzgerald and Billie Holiday also driving the new season’s thinking.

So what does that all mean in practice? Well, the collection is big on brocades. Making an impact in the opening evening coat (shaped in at the front but with fullness in the back), the use of brocade made it feel very couture.

And that couture mood continued with strapless evening dresses with bell-shaped skirts (and the collection’s recurring ribbon detail looking like it should be carrying some sort of royal insignia), plus shorter flared coats or dresses atop full tulle underskirts. Imagine those as the cocktail party equivalent of the longer gala gowns (or maybe the bridesmaid versions of the full-on wedding dresses).

But it wasn’t just about brocade. Peach toned moiré dresses trimmed in regal jewels were breathtakingly beautiful and were rescued from being ‘just another OTT evening dress’ by their ballerina length and being teamed with youthful flats. Weirdly, some of it felt more Prada on one of that label’s regular jaunts to the 50s than Erdem (but that’s not a bad thing) and ribbon-trimmed beaded puffballs with sheer overlay and gathered waistband added to the effect.

So where did the 30s looks come in? A series of slimmer cut dresses characterised by details and silhouettes that not only summed up the inter-war years but also had a 1970s-doing-a-30s-revival edge to them. What didn’t feel very 70s though was the quality. The virtuoso cutting and gorgeous beading really would have been hard to find back in that decade. 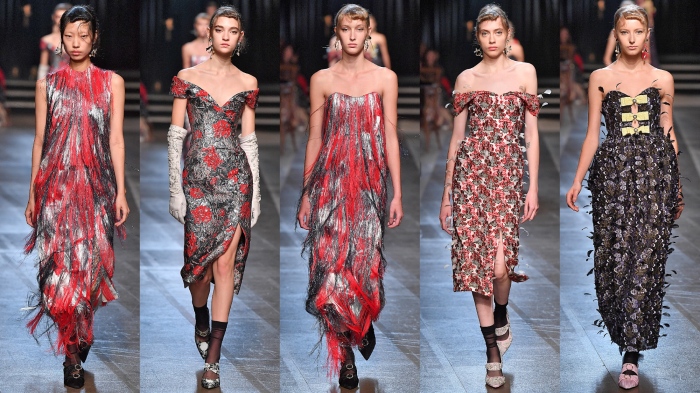 Lets hope we see a few of these turning up on red carpets sometime soon because despite their royal inspiration they’re not very likely to turn up on anyone with an HRH before their name (although a few of them might convert pretty neatly into a maternity dress, so who knows?) 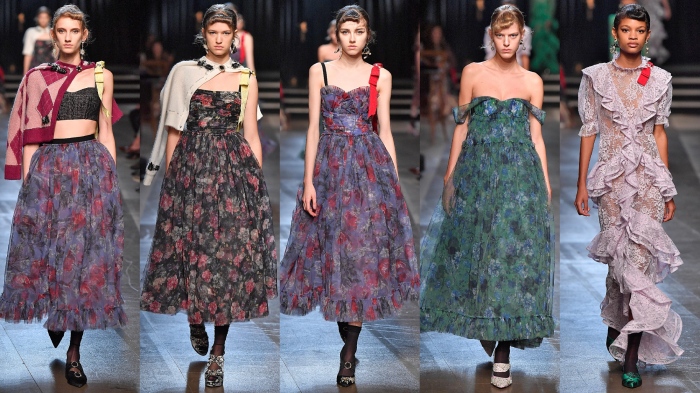