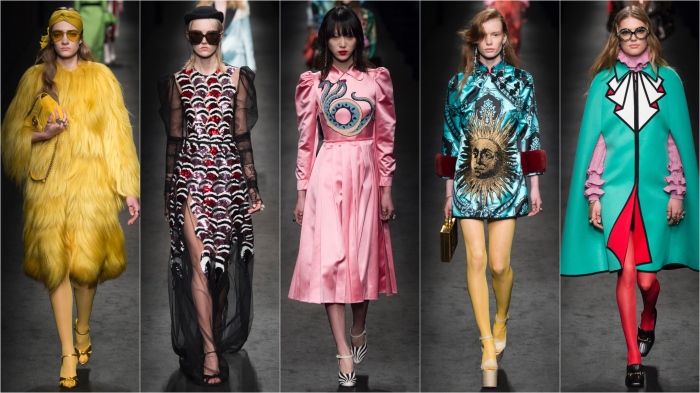 OK, Milan has started so now the serious trend spotting begins as fashion’s big guns are wheeled out. And where better to start than Gucci?

Today’s show was… well, predictable really. Not that this is a criticism. Since being appointed just over a year ago, Alessandro Michele has imprinted his vision on Gucci so completely it’s (almost) hard to imagine there was ever a Gucci under Frida Giannini or Tom Ford.

That imprint is very distinctive. After shaking up the label for his first collection in charge last year, he’s since allowed it to evolve and the AW16 offer is a clear evolution from his SS16 and especially his pre-fall 16 offerings, such as trompe l’oeil detail on the cape. That may give more support to the argument that the very existence of pre-collections is confusing and muddies the waters when it comes to clear trend progression from season to season, but it also means he doesn’t condemn your last-season purchases to the trends has-been rail every few months.

Some of this collection was lovely, fabulous, wow etc. Some of it was so-so. But all of it mattered because Michele/Gucci are currently at the top table when it comes to influencer labels. So, here’s my (very personal) view.

Michele showed us his love of animal motifs again with simple placements or motifs worked into the structure of the clothes. At times these were subtle, at others OTT – like the cluster of writhing snakes working their sequinned way down an evening dress. But the message is clear – animal motifs are big news and they work on just about anything.

Even the most extreme labels usually send out a selection of ultra-commercial pantsuits in every mainline or pre-collection and Gucci is no different. The key point about Michele’s pantsuits is that, taken out of context you might never even guess they were from his hand. Also key – the fact that pantsuits are being pushed for all occasions from office to lunch date to party. Keep the cut slim or gently eased (but not too full). 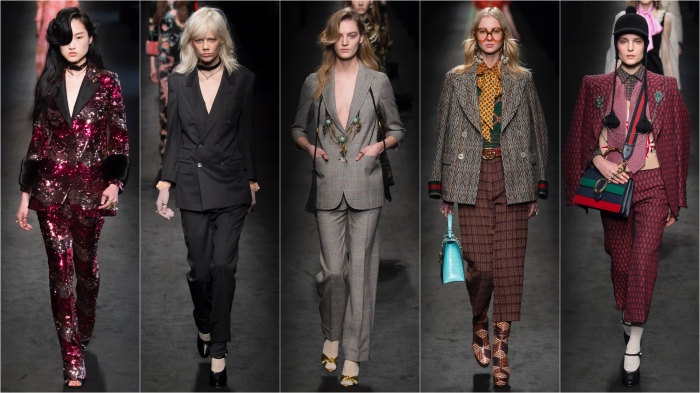 Michele may have shaken up Gucci but many of his looks are superficially conservative. Yet they usually have some element that means traditional they ain’t! Get close to the heritage G print on that skirt and you can see that the colour has run on some of the Gs. The print on the skirt of the evening dress is a series of far-from-cute putti while the horsebit print on the coat has a cartoonish edge. The other two looks may seem quite conservative on the runway, but try wearing them on the street and you’ll get plenty of stares. What they do say though is that the wider cropped pant is here to stay. 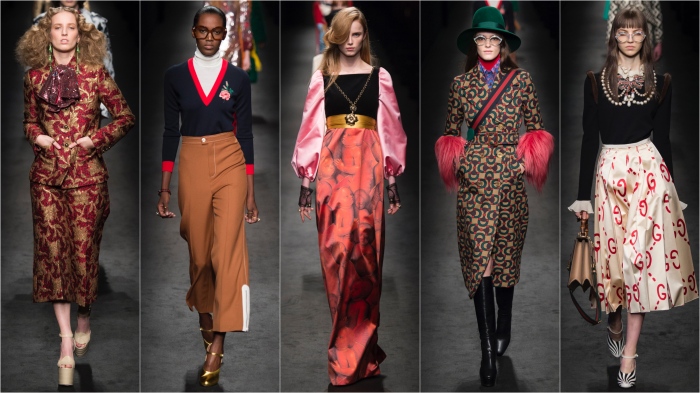 Michele has a stronger feel for colour than any of his Gucci predecessors and this collection shows that at its best. Whether blending unexpected combinations or offering up single-colour looks, it’s a welcome continuation of the feel for colour we also saw in London and a refreshing change for an autumn/winter season, especially when it comes to cosy outerwear.

Fashion has been loosening up for a few seasons now and tentatively introducing a wider silhouette. I say tentatively because this kind of change can take years for consumers to accept. I remember the late 70s when Claude Montana and Thierry Mugler were almost single-handedly responsible for retailers catching a sales cold when they copied their wider shoulders, only to find that within a few years, women couldn’t be coaxed out of their American footballer-sized jackets. What Michele has given us is a choice between wide cuts or shoulder detail that offers width the contrast of a closer cut.

I’ve been banging on about a return to high-profile hosiery for a few seasons now and the continuing importance of mini lengths just adds to this. Michele has combined short dresses (both for day and evening) with coloured hosiery to make a shapely pair of pins the focal point of this look.