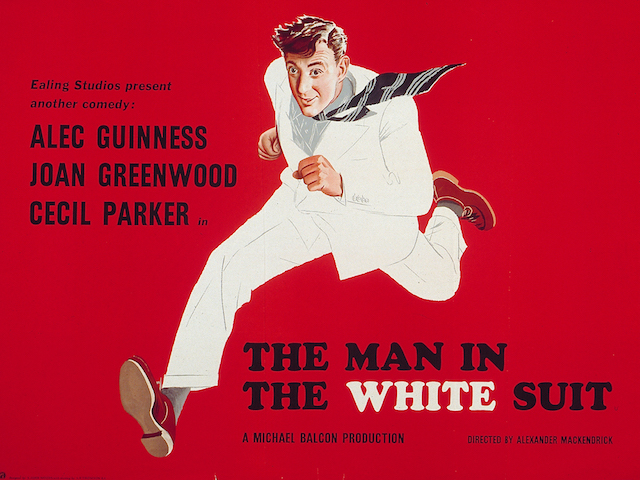 The Man In The White Suit. Picture courtesy BFI.org

There’s a 1950s British movie called The Man In The White Suit in which scientist Alec Guinness invents a durable, self-cleaning fabric that he thinks will be boon to mankind. But he ends up as a hate figure as businesses and their workers realise they won’t need to make any more textiles or garments.

Maybe it was a less disposable age, but the thought that people these days wouldn’t buy new clothes because their old ones hadn’t worn out is quite amusing. The businesses most likely to get upset would be detergent makers. But I’m sure they’d be able to come up with a ‘need’ for us to wash our clothes because of bacteria, let’s face it, they’re always warning us about fashion-related bacterial attacks already.

The point is, the film-makers thought technology was heading in the direction of everlasting, self-cleaning textiles. And 65 years later, we’ve (almost) got there.

Two pieces of news this morning demonstrated that. First, shirtmaker Hawes & Curtis has signed a deal with Liquiproof for a line of stain-resistant shirts. The Daily Telegraph reported that Liquiproof’s non-toxic, ecofriendly coating, which was featured on BBC show Dragon’s Den, makes anything it touches waterproof.

It’s an invisible coating, unlike the one in the movie that was radioactive and made everything slightly luminous. The shirts are machine-washable but will be stain-resistant for life, we’re told. Now that’s what I call real wearable tech (who needs a pointless watch when you can have a non-stain shirt?) They should be available by August.

Meanwhile, the Wall Street Journal slo reported today that scientists at RMIT University in Melbourne have found a way to remove stains by exposing them to sunlight.

They embedded tiny (and invisible to naked eye) flecks of silver and copper in cotton fabric. When exposed to light, these nanostructures released bursts of energy that degraded organic matter on the fabric in minutes, including superbugs.

It’s still in its early stage but Dr Rajesh Ramanathan said the advance “lays a strong foundation for the future development of fully self-cleaning textiles.”

One thought on “Self-cleaning clothes: Are they finally here?”