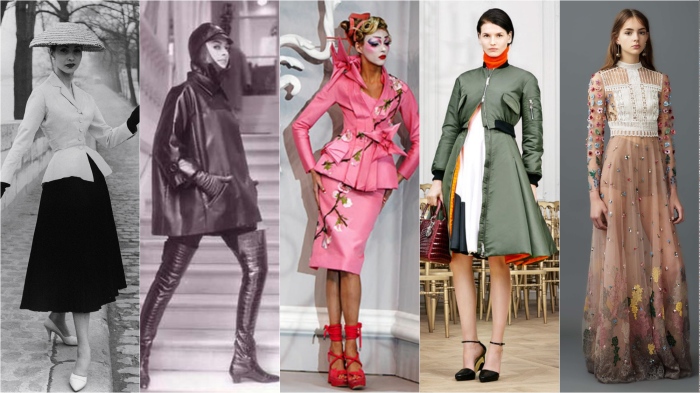 L to r: Dior by Dior, by YSL, by Galliano and by Simons… plus Valentino’s latest

Dior is preparing to name one half of Valentino’s dynamic duo as creative chief, according to a Reuters report today. If true, it means Maria Grazia Chiuri, who with Pierpaolo Piccioli has helped to reinvent the Valentino brand and drive it to impressive growth, would be Dior’s first ever female creative head.

She had been most prominent among a number of names being linked to the job in recent months but while it’s now assumed her move to Dior is a done deal, Dior has not confirmed the news yet.

As well as questions around the direction in which she would take Dior, it also raises the issue of what happens at Valentino now, whether Pierpaolo Piccioli would remain as sole creative head and what the non-compete clauses of her contract are.

Not that Dior cares about that. What it does care about is returning to the strong growth of earlier years that has fizzled out of late. The company has blamed the general luxury downturn for that slowing growth but while designers Lucie Meier and Serge Ruffieux have worked to keep the brand on track since Raf Simons’ relatively early departure last year, the recent Resort 2017 collection showed that they don’t have the grand creative vision expected from such an influential label. And when you have to follow in the footsteps of Dior himself, Yves Saint Laurent, Marc Bohan, Gianfranco Ferre, John Galliano and Simons, that’s hardly a criticism

So what’s the timetable? Reuters reported a source saying Chiuri will be announced as the new creative chief after the couture show next month (which could be the kiss of death for the sales prospects of that couture collection!)

And what should we expect from her work at Dior? Probably less of a modernist approach than Simons took but also less-flash-more-gentle-femininity than Galliano’s work.

One thing that will be interesting is how, just like Stella McCartney and Phoebe Philo some years ago, the individual signatures of Chuiri and her ex-partner at Valentino emerge when working independently of each other.

Another interesting point is that news emerged this morning of Hedi Slimane suing former employer Kering to get his waived non-compete clause reinstated. Slimane had been another name associated with the Dior job and the timing of his lawsuit may not be coincidental. Had he assumed the Dior job was in the bag?