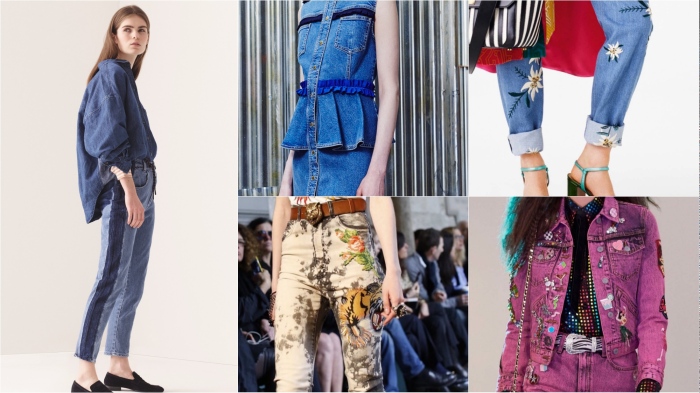 Runway denim and high street denim are two different animals but sometimes they come together with ideas from the runway filtering through to a store shelf near you. And this pre-season? Well there’s plenty to pick from including intense colour, zany pattern effects, shrunken or oversized versions of timeless classics and a jamboree of embroidered motifs. OK some of it might not have enduring appeal (only time will tell) but if you pick up the look from a fast fashion store at £24.99 (rather than a designer label at £249), who cares?

Looking for an instant update? Think acid-washing, bleaching or a denim version of a camouflage print. The piebald finish can really ring the changes on a pair of skinnies (and if anything can replace slashed knees as the jeans style of choice. I’ll be eternally grateful). It works well for ultra-loose boyfriend cuts and jackets or shirts too. Add on an oversized tiger’s head motif or embroidered florals like Alessandro Michele did at Gucci and you have the pick of two top trends. 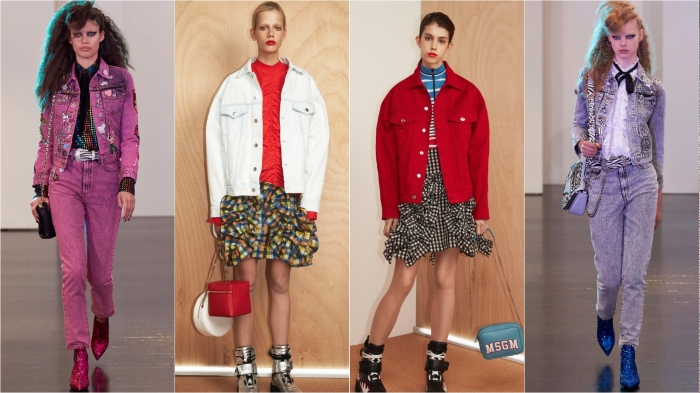 Coloured denim has come and gone so many times in my lifetime and for this pre-season it’s definitely in with a capital I. Marc Jacobs backed it with his head-to-toe colour-washed jeans and rider jackets in deep pink or lilac, working especially well with added badges, extreme make-up and some fun ankle boots. But solid colour’s also an option for jeans or oversized rider jackets of those days when “forever in blue jeans” is just a little too boring. 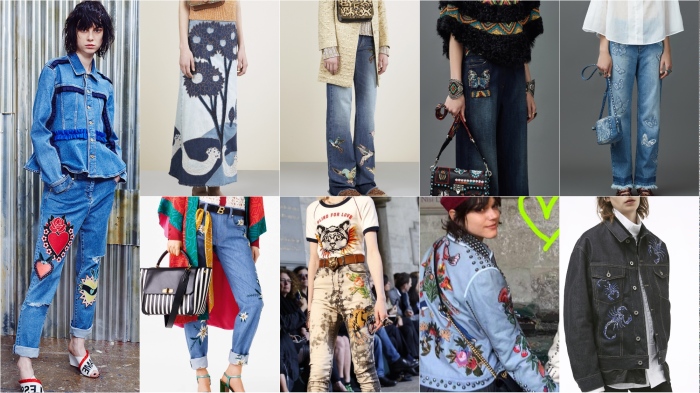 Gucci and Valentino have both been backing embroidered denim for a few seasons so it’s a trend nobody can ignore. Both labels are big on decoration this pre-season too and they’ve been joined by others as designers search for ways to update skinnies, boyfriend cuts, dresses, skirts and jackets. Think applied florals, animal motifs or symbols like statement hearts. And don’t forget the perennial silver stud for a tougher, unisex alternative if all those florals and butterflies seem a bit too much.

Not that every shopper will be looking for a denim update that’s as in your face as any of these. For more traditional, low-key updates, designers are opting for details that are subtle but still offer a reason to buy something new. For a start, it’s all about allover denim as shrunken jackets or oversized shirts act as the perfect complement to slim-but-not-skintight jeans. Then there are subtle tonal contrasts with a deeper or paler sidestripes, contrast topstitching or tiny ruffle trims in various shades of blue. Denim dresses continue the allover denim direction and their waist definition marks this pre-season out as one in which the natural waistline has a starring role. Jeans continue to put the focus on a higher, natural waistline, with the occasional low-slung boyfriend cut simply being the exception that proves the rule.