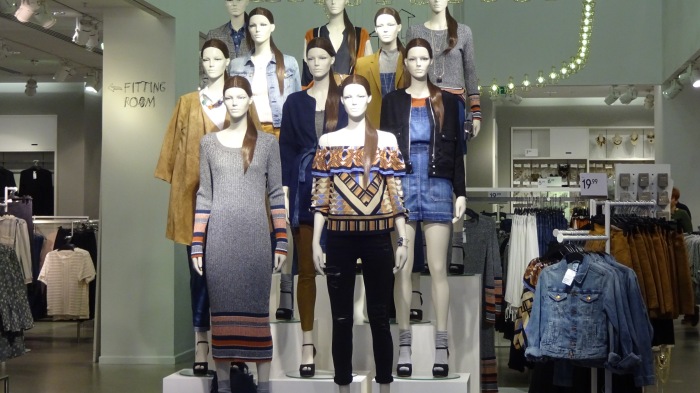 The UK fashion sector has a whole shopping cart of problems ahead of it and Brexit is only one of them. But it has opportunities too and social media is one of them.

New data from Kantar Worldpanel shows the market falling slightly (by 0.1%) in the 52 weeks to June 5.Now a 0.1% year-on-year drop may not be much compared to an overall increase of 20% in market size since 2006, but if it continues (which is likely), it will eventually add up to quite a lot.

All this is indicative of a deep-seated behaviour change. And that is? We don’t want to pay full price any more, a problem currently causing headaches in the US fashion sector too.

Just look at these examples. It seems that a pre-liquidation BHS made 60% of its sales on markdown. For French Connection the figure is 37%, but even more buoyant businesses like Karen Millen are also selling 37% of goods at cut prices.

Kantar’s consumer insight director Glen Tooke said: “Stores are becoming increasingly reliant on discounting and power has shifted into the hands of consumers. They have come to expect discounts and are trained to shop during sale periods. Retailers are suffering from these shifting expectations. The problem is exacerbated by retailers over-buying and then needing to clear stock simply to make room for the next season.”

Interestingly, he also said that around 40% of consumers say that being on-trend isn’t relevant to them “yet brands and manufacturers are continuing to sacrifice quality, fit and price for trend-led products, and we’ve witnessed a number of high-profile retailers come under criticism for doing so.”

That is the question. While there’s some truth in Glen Tooke’s comment, and a major name like M&S has already said it’s going to reverse that trend-focused approach, it’s perhaps not as fair as it might seem at first. For a start, what about the other 60% of consumers? I assume they either said being on-trend is important to them or at least has some bearing on what they buy. Also, consumers might be surprised at how much of a retailer’s buying budget is dedicated to core items and how (relatively) little to trend-led product. So I think there are more issues involved here than too much on-trend product.

The fact is that retailers no longer think in terms of two giant season but have multiple product drops year-round. Product from those drops has to be cleared to make way for what’s new-in and with consumers having been trained to focus on price cuts and the weather hardly ever playing ball, markdowns are inevitable.

With consumers focused on the lowest price, it’s no surprise that 10.1% of clothing spend happens in supermarkets, although there’s also a convenience factor involved in that.

Other stats from kantar include the fact that the internet is changing the way we buy. Firstly, 23% of fashion is now bought online compared to 2% 10 years ago. But social media is also key with the 16% of women who are active on Instagram and share selfies spend £200 a year more than the rest of us.

These are heavily engaged, fashion-focused customers. The downside is that reports I’ve seen over the past couple of years suggest they’re also bargain-focused. The thinking is that the more selfies you take (and post), the more you want to be wearing something different in each one so cut-price fashion is a must.