Welcome to the year 2000. That’s what it felt like watching Tom Ford’s latest runway collection yesterday. Is that a criticism? Not at all, because the collection was really rather good.

Just think back to (around) the year 2000. Tom Ford has shaken up Gucci and made it sexy and it won’t be too long before he’ll soon be doing the same at Yves saint Laurent. In the process he’s making those two labels major fashion influencers and offering us a version of luxe that feels full of energy, that plunders the past while feeling modern, that can be formal while mixing in casual details and that makes every runway show a true must-see.

Now fast forward a few years and while Tom Ford may have a thriving business, his days as a major influencer seem to be behind him as he enjoys his life making clothes for the ultra-rich, making fragrances to die for and making movies that aren’t half bad for someone who’s ‘just’ a fashion designer.

Until yesterday. On Wednesday evening, Ford lit up the usually-dull first few days of New York Fashion Week by showing his collection on opening night. And in true 21st century designer form, he made it instantly shoppable. It may be NYFW for SS17 but these clothes felt like a cold weather collection. There was no concession for customers who want to buy before they decamp to the Caribbean for the winter. This was dressing for a New York winter. 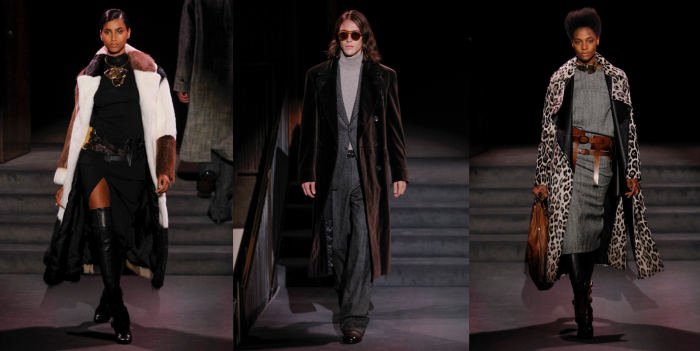 But there was another strand running through it that was all about Ford’s glory days. So many of the looks felt like some of those collections that defined both Gucci and YSL from the late 90s through to the early years of the noughties. And they were all the better for it.

The shearlings, the reconstructed pencil skirts, the multistrap leather belts, the skin-tight boots, the belted leather tunic tops, the colour blocked furs and sequin dresses, the leopard print, the body-skimming monotone dresses with cutouts linked by chunky gilt hardware, even the models’ hair (slicked close to the head like a late 90s Gucci ad campaign). And for men, there were puffer coats, youthful white tux suits and 60s-print velvet tux jackets. It may have felt a bit more grown up than some of Gucci/YSL collections of over a decade ago but the Ford signature was clear.

And the models added to the heyday vibe – among the usual crop of youngsters was Amber Valletta, Carolyn Murphy and Liya Kebede.