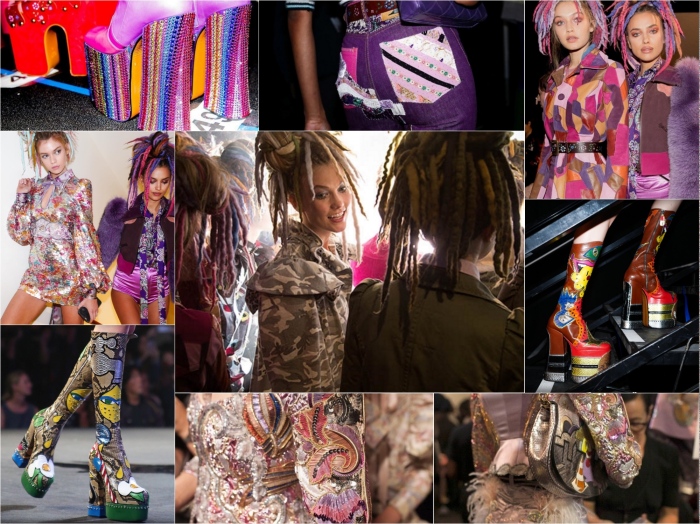 Usually, when designers axe their secondary collections and “merge” them into their main lines, the character of the cancelled label disappears into that of the big sister one.

But it’s a funny thing that ever since Marc Jacobs canned his younger, cheaper Marc by Marc Jacobs offer, the big sister has behaved more like its former younger sibling. The grown-up luxe of the main line has been replaced by a younger, more disruptive edge with a “screw you” attitude. Even the khaki military jackets that were something of a ‘Marc by…’ mainstay in that label’s glory days have made a comeback. 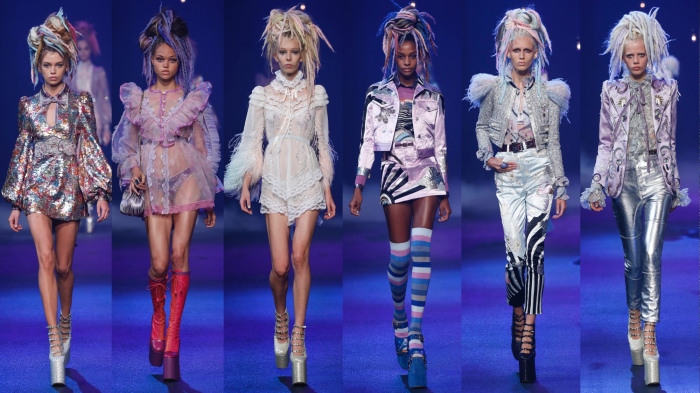 So it was yesterday in New York as Jacobs mixed it up for SS17. Forget the Oscars. If Jacobs was aiming for the red carpet, the VMAs looked more his thing.

Not that any of this is criticism. There may have been plenty that was unwearable on the runway yesterday (those ultra-platforms for a start), but there was more than enough to want, wear and enjoy too. And he hasn’t really left luxe behind. Get in a little closer to all those looks and you can see a blend of luxe materials and craftsmanship that will keep the prices as stratospherically high as those platform soles.

Which was good news on a day when the fashion was thinner on the ground than NYFW’s usual last day. Calvin Klein didn’t show with Raf Simons having decided to keep the last collection created under his predecessor for buyers only.

So, thank goodness for Marc Jacobs. And what was the news? His silhouette mixed body con with volume but moved away from the Vetements-influenced hyper-volume of recent seasons. It kept his usual early 70s obsessions, offered up mini lengths, skinny pants, and a riot of colour and pattern, the latter courtesy of artist Julie Verhoeven.

The wider shoulderlipne he’s experimented with of late was reined-in, and replaced by detailed that added bulk to the shoulder (exaggerated puff sleeves, frill detail) without American footballer-style width.

There were plenty of wishlist pieces like the aforementioned khaki jacket (softened with puff sleeves), a camo jacket that almost looked pure army surplus plus, some other camo pieces (skinnies, a peplum hem mini dress and a mini skirt) that had definitely been nowhere near an army camp.

By contrast to this relative sobriety, Jacobs also opted for shimmer and sheen with items like a sequinned mini dress with giant bishop sleeves, a fry trimmed silver biker, a body con satin mini with frilled shoulders, a silver snakeskin skinny coat and creased satin rider jackers also stretched out into coats.

A babydoll playsuit with ostrich feather trim on the sleeves and a sheer mini dress (or was it just a long blouse?) summed up the slightly retro, totally irreverent feel of the whole collection (as well as offering up inspiration for the initiates and nightwear sector).

And of course, Jacobs’ favourite era, the 70s, came with a selection of our revival pieces like a patched suede mini or what we in the UK used to call ‘Budgie’ jackets (remember them? If you don’t, Google it).

In fact, the jacket was a star piece throughout, as well as them, plus the camo pieces, the bomber also hogged the spotlight in embellished satin or as cropped version of an MA1 flight jacket, styled as if they were inside-out with an orange body (and presumably a darker lining). Only the head embellishment and shoulder frills made it clear these were right-way-out.

Pattern was key throughout, from camo to the diagonally stripped and sequinned oversized sweat jacket, to a sun and moon embellished satin jacket that was pure early Bowie. The liquorice allsort print on sheer black silk, the scenic prints on a satin rider jacket and mini skirt, a suede and snakeskin flippy mini, the rows of sequin hearts on a skinny knit all felt fun, surprising and commercial too. A surefire favourite come 2017 was a multicolour pieced and patched suede coat. 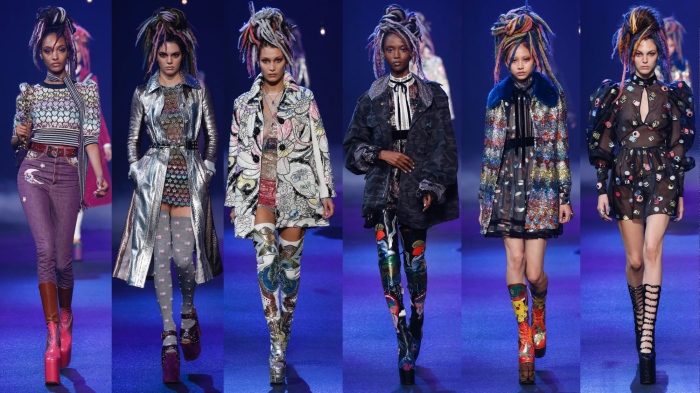 Legs were a major feature of this collection whether uncovered or covered. Those minis dealt with the former. But for the latter, Jacobs gave us skinny pink-dyed denim with blanket-stitched pocket and fly edges plus moon and star appliqués, red skinnies with visible zip decoration and leopard print inserts, and silver patterned pants decorated with giant black rising suns.

But even more interesting were the over-knee socks decorated with pearls, cartoonish hearts or multicolour stripes. And as for those 70s-influenced boots, there’s almost too much to describe. They featured snakeskin eyelets and an overdose of pop art appliqué and embellishment or came with multiple tiny straps working their way up the leg or as bi-colour lace-ups. Almost unwearable those platforms may have made them but it’s to be hoped the boots that actually drop in-store will be a little closer to the ground because it would be a shame if hardly anyone gets to step out in them. 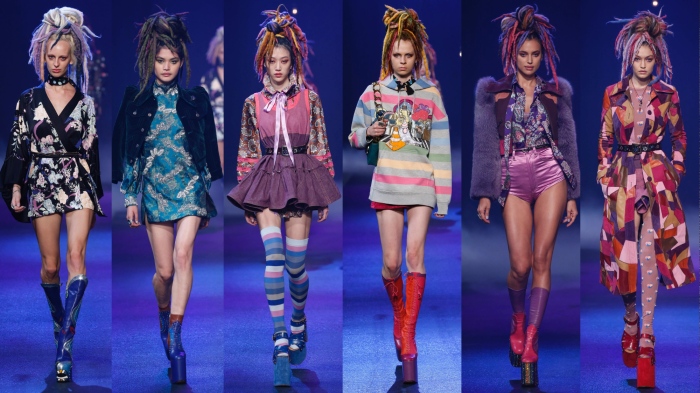