Back in the 90s, there was a big trend for slip dresses. I couldn’t really get my head around this one as I remembered my mum wearing virtually identical pieces 30 years earlier, but under her clothes, as a petticoat.

Think of Elizabeth Taylor in the bedroom scene in Cat On A Hot Tim Roof and you’ll know what I mean. Given that slip dresses are back with a vengeance, between Liz taylor in her and Paul Newman in his pyjamas, that movie’s about as on-trend as it’s possible to get.

But I digress. The point is, it was almost like an invisible age bar to the trend. If you remembered these dresses for their original purpose, you were too old for them.

It feels a bit like that with the current pyjama trend, which was heavily backed on the runway for SS17. However beautiful the fabrics and however cool the wearer might be, she still looks like she’s forgotten to change out of her nightclothes. And hey, that’s the kind of behaviour that could get you banned from Tesco or from dropping off the kids outside school.

Again, the invisible age bar kicks in: if you can remember your dad going to bed in anything that looked similar, you;re too old and need to steer clear of this one.

So where does that leave the trend? Well, it’s still perfectly valid for relaxed summer day dressing or even occasionwear for a youth and contemporary shopper.

What’s important to remember is that pyjama dressing doesn’t have to be an allover look. In fact, it’s probably best not to see it that way – anyone too enthusiastically combining Burberry’s silk dressing gowns with Dolce & Gabbana’s silky pyjamas really would fall foul of the aforementioned bans and would instantly acquire fashion victim status.

The addition of the dressing gown to the trend (rather than just pyjamas) is interesting, whether it’s a facsimile of a 60s-style quilted housecoat-dressing gown or a mannish version with shawl collar, on the surface it’s a full-on endorsement of the sleepwear-to-go-out-in trend. But dig a bit deeper and it’s not. 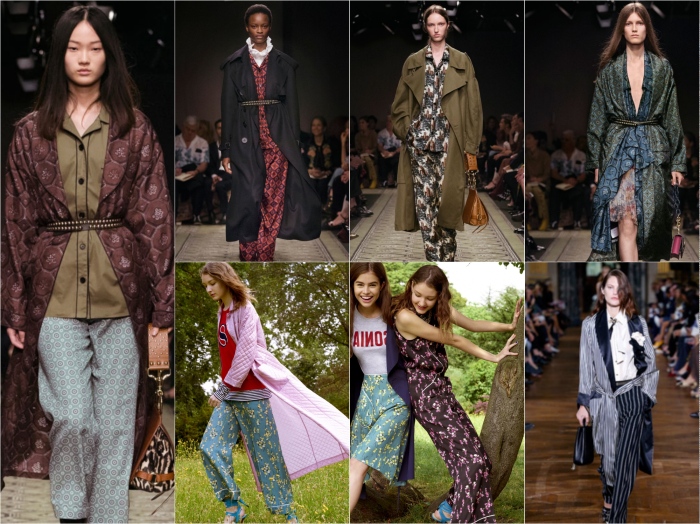 Burberry, Sonia by Sonia Rykiel and Lanvin SS17 and AW16

It’s as much about a number of different trends. Think of that dressing gown as a summer staple or as an evening piece for taking off the chill. Think of the pyjama jacket as a soft evening jacket, a statement blouse, or a vehicle for repeat retro botanical or geometric prints. And think of those pyjama pants as part of a key direction in trousers that sees more fluid, wider shapes with piping and sidestripe details and (again) print stories, especially the stripe.

As individual pieces, the separate items that make up the pyjama-dressing gown combo become more wearable. But there’s another way to make them wearable too and Prada did that best on the runway. Just think of ‘pyjamas’ as co-ords that don’t have to be styled to look like classic PJs. Prada opted for cheongsam styling and added print, beading, belts and ostrich heathers to make them work.