It was like a trip down memory lane at the Prada Resort show in New York as Miuccia Prada and her team revisited the geeky, awkward, but hugely influential collections that the label gave us in the 1990s.

But it was mostly a more pimped up version of the look with frilled edges, colour clashes, jarring embellishment, and pattern extending to footwear… except where it wasn’t when the label’s minimalist leanings also put in an appearance on some surprisingly pared-back pieces

Weirdly, although it was completely different in style and shown a continent away, it had few things in common with the Chanel show. The retro edge, the cropped jacket pantsuits (in print or brocades), the miniskirts, the hats with everything, the avoidance of the new-and-shocking in favour of label favourites. There was even some best-to-be-avoided hosiery. In Chanel’s case it was white tights. In Prada’s they were beaded with wavy lines looking like they’d been twisted as they were pulled on. Not a good look for anyone less than confident about their legs.

Prada has done heavily beaded hosiery before and this collection was certainly big on revivals. Prada archive prints were headline grabbers with those tightly-packed geometrics making an impact. Why had Prada brought them back? No, it’s not likely to be laziness or lack of inspiration. It’s more likely to be a pitch for its younger customers. Those prints quirky have nostalgia appeal and Millennials love that, along with all other things archival. 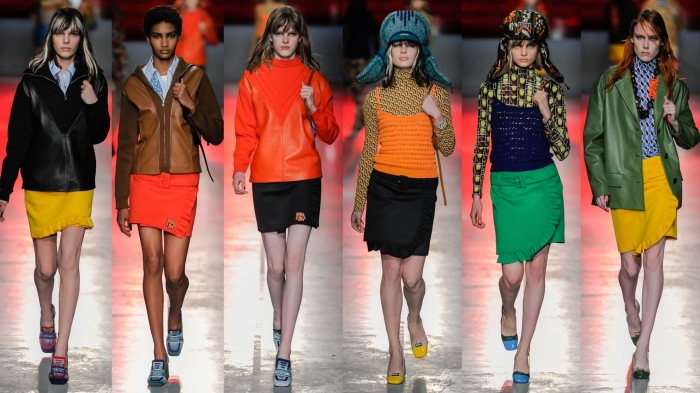 In fact, the whole collection felt like it was targeting youth rather than the older demographic that’s got the money you might usually associate with a Prada customer.

While Chanel focused on cocktails, and many other labels will pitch their resort shows at the boardroom-and-business-meeting customer, Prada’s youthful, casual edge and interchangeable pieces felt more suited to co-working spaces in Shoreditch, although, as mentioned, the price tags might put paid to that idea. 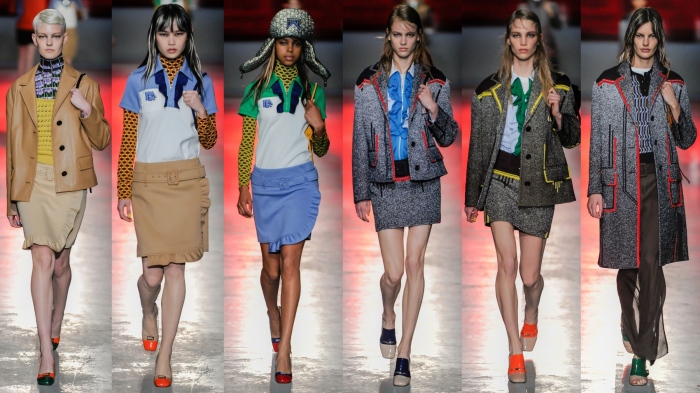 Maybe the affluent young global customers that have been flocking to Gucci and helping to make it luxury’s second biggest brand (after Louis Vuitton) will be won over by the label though. There’s certainly plenty for them to choose from if they tire of Gucci’s brand of maximalism. Think wrapped leather minis; bi-colour leather tees with bust frills and updated Prada logo; geeky floral and geometric print jerseys layered under leather logo vest tops; sporty tops; hipster pants; geometric print minidresses; and sheer maxi slips that are a world way from red carpet dressing with their trademark Prada giant sequins or beads and T-shirt-style tops. 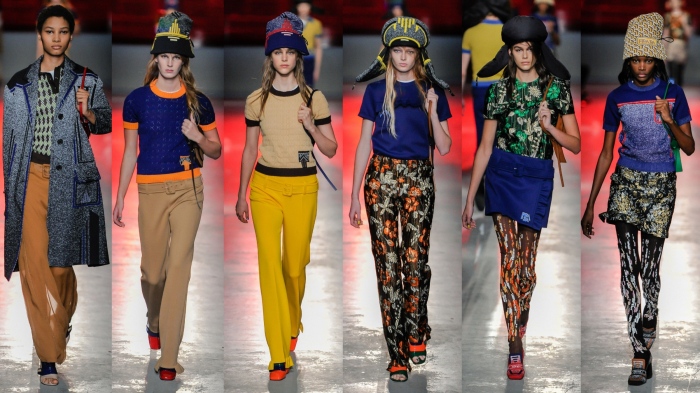 And as if that’s not enough to scream ‘look at me’, power colour colour thrown into the mix might just do the trick with yellows, greens (emerald or metallic/acid), peach, rich blues, tomato red, teal and more.

Will it sell? Prada certainly hopes so as it’s banking on a rival of interest to send its profits (and share price) back up in an age when rival Kering (via the aforementioned Gucci as well as Balenciaga) seems to enjoying the Top Influencer status that Prada once had.

But not everything needs to sell out to prove its success. The oversized trapper hats that were worn throughout may not appeal to everyone but they really ram home the message that midseason/pre-season collections don’t have to be safe and boring and that Prada can still cut it with the best of them.