Handbags have been having a tough time this year. So has luxury. So what do you do when you’re a luxury handbag maker? Probably get down on your knees and be thankful you’re keeping your head above water.

Coach on Tuesday showed that it’s certainly managed to avoid drowning but it’s a close thing. Its net sales rose only 1% to $1.04bn in the quarter ended October 1 (Q1), the smallest rise in a year.

Now admittedly, any firm selling over a billion dollars worth of stuff we don’t actually need over a three-month period can hardly be said to be doing badly and Stuart Vevers’ job as creative guru looks pretty safe.

But this is a business world that wants growth, growth and more growth. So 1% just isn’t going to impress anyone. Or is it? Actually Coach’s shares rose nearly 6% in early trading today so someone must have been impressed. Let’s look closer.

Maybe they were welcoming a good rise in net income, which went up to $117.4m/42 cents per share from $96.4/35 cents a year ago. Or maybe they liked the fact that the company was sacrificing sales in favour of margins and maintaining its image as it cut back on promotions and stopped supplying its bags to over 250 department stores.

CEO Victor Luis was certainly upbeat, saying he was “pleased with our performance, highlighted by continued positive comparable store sales in North America and growth internationally.

“We remained focused on elevating the perception of the Coach brand through compelling product, differentiated store environments and emotional marketing. At the same time, we implemented the strategic actions necessary to reposition the brand and streamline our distribution in the promotional North American department store channel. Despite this deliberate pullback, we achieved growth across key financials, including sales, gross profit and operating income, as well as double-digit earnings growth.” 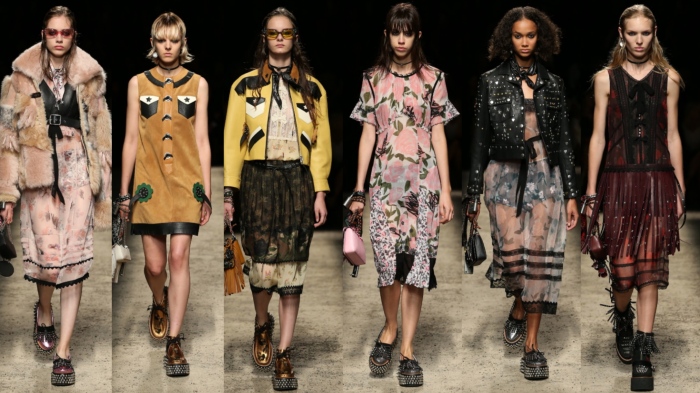 I just wish he’d said more about that “emotional marketing”. I’ve never really seen Coach as especially emotional. But what do I know?

Back with those sales. The 1% rise was actually a 1% fall on a currency-neutral basis, but gross margin for the quarter was 68.9%, compared to 67.6% in the prior year.

The Coach brand itself saw revenues of $950m, up 1% reported and down 1% currency-neutral, hurt by the cutback in US department stores. Total North American sales fell 3% to $545m with physical store sales up 4% and comps up 2%. As planned, sales at North American department stores declined 30% and e-commerce sales were down too. Sorry, did I really say that? Someone’s seeing falling e-commerce sales? Yes, apparently it was all down to a “further decline in the company’s eOutlet flash sale business.” No further explanation though, unfortunately.

Net sales for the Stuart Weitzman brand were $88m, up only slightly from $87m, impacted by wholesale shipment timing.

Luis said the company is making “the key investments in management and creative talent, as well as infrastructure to support long-term, multi-category growth,” at the brand. “We’re driving global awareness and brand relevance, gaining traction with the millennial consumer. Importantly, we continue to expect Stuart Weitzman’s sales to increase at a double-digit pace this fiscal year.”

So there you have it. Not bad really in a world where luxury and bags are tanking for many brands.