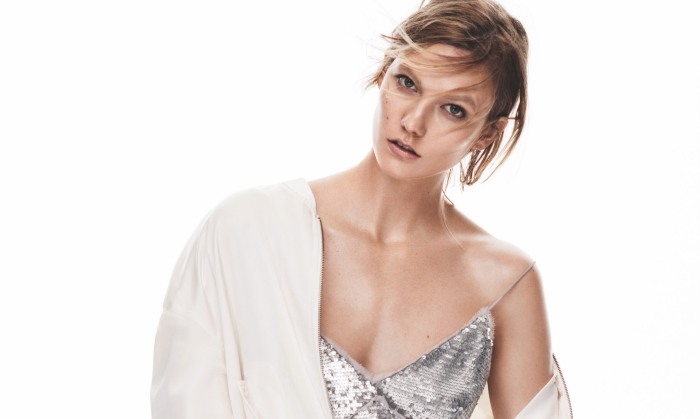 Mango has announced its third micro-season trend in line with its new strategy of launching a trend-based campaign every month. And the star ‘face’ of this one? Step forward Karlie Kloss.

An updated take on 90s grunge, New Metallics follows Tribal Spirit and Soft Minimal with “rock ‘n’ roll-inspired elements” including mini-dresses, boxy jackets and lots of denim, alongside ankle boots, sneakers  and a selection of heels.

A mixture of dresses and separates are finished with metallic detailing to give each look “a hard edge twist”. We’re told the collection uses sequins, silver tones and shiny finishes to revive “the carefree appeal, which singers such as Courtney Love and fans of Nirvana imposed on the decade of grunge”. Hmmm. Not sure I’d ever describe Courtney Love or Nirvana as “carefree”, but there you go – this is fashion, after all.

The campaign (which boasted musician Jamie Hince “adding rhythm to the photo shoot”) will hit the high street and various advertising platforms this April. Hince wasn’t only there to provide mood music – his song Future Starts Slow will also feature in the TV commercial.