British (and international) fashion’s great and good gathered last night to see who’d pick up the top prizes at the BFAs.

As it happened, JW Anderson’s Jonathan Anderson walked off with both the men’s and women’s prize, Alessandro Michele of Gucci was top international designer, Charlotte Olympia was the winner in accessories and …. Oh hang on, this is getting boring.

What we all want to know is – who wore what? So, with that in mind, this is my very personal view of who looked best. I’m not going to list the worst-dressed (and there were some real horrors) as I’m not into online trolling. Let’s keep things positive folks.

This could also have been called Best Crop Top. The richness of the top contrasted with the wide, heavy silk-but-oh-so-simple skirt worked perfectly. The Old Hollywood hair (think Grace Kelly) was the icing on the cake.

It’s a tough look to carry off – making sure people notice the slash without ‘doing an Angelina’. But it works. It helps that the dress would look good even without that slash and I love the dark, shadowy print.

Best Display of Flesh Without Going too Far: Jourdan Dunn in Mugler

There was a little too much side boob and too many big pants on show yesterday. But model of the year Dunn showed how to do it with strategic cutouts, a thigh slash and an almost-non-existent back without revealing anything her mum wouldn’t want her to.

Best Use of Embellishment: Karlie Kloss in Chanel

I’m not a Chanel fan (usually) but I love the simplicity of this one with its Paisley patterned lace and simple embellished bands.

Malaika Firth in Topshop and Riley Montana in Balmain

OK, there weren’t many slip dresses on show but this one has to take the prize for daring (and on such a cold night too). Nice to see something on the red carpet that teens and 20-to-30-somethings might have a chance of wearing too.

The great thing about this Balmain collection is that it offers up sex without showing too much flesh (note the modesty-preserving slip from bust to thigh). It’s also great because it taps into the key crochet trend for SS16. 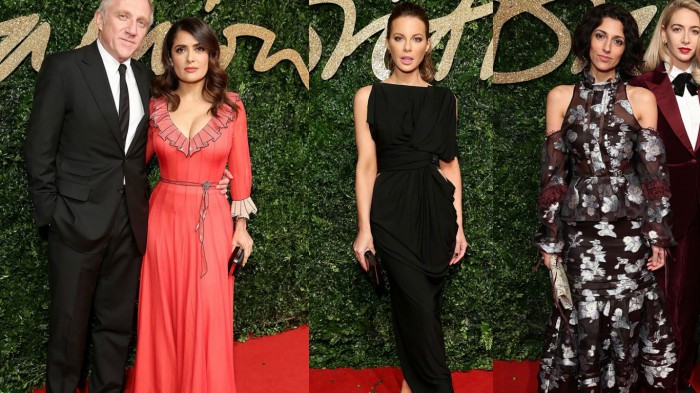 Black dresses are red carpet stalwarts but can be a little dull. No risk of that with this one as the combination of draped silk and low-key cutouts work beautifully.

Style.com’s latest executive hire rocked the bare shoulder trend without making it look like her dress was falling off, a feat not everyone achieved last night.

Georgia May Jagger in Gucci

Best Back View: Georgia May Jagger in Gucci

From the front it was deceptively simple and made you do a double-take before you realised she was wearing a flesh-toned under-dress. From the back, the heavily embellished snake made it a perfect example of fashion craft. Not sure I’d like to risk doing the zip up in a hurry though.

Love it or loathe it, shocking pink is a fashion driver for SS16. Roksanda in her own design showed this is the best way to wear it – with dark hair and über confidence. And don’t forget power red. Lady Gaga chose a Tom Ford gown that was pretty simple but couldn’t be missed.

When you’re as statuesque as Christie, you need fashion that makes an impact and this Westwood dress certainly does that. 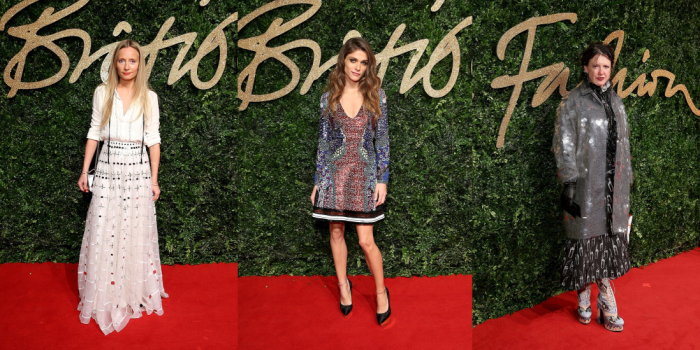 The stylist chose a dress that combined delicate layers of silk and some striking details with a casual top that felt like one of the most comfortable looks on the night – as well as one of the most striking ones.

Short skirts don’t always work on a red carpet graced by sweeping gowns and power statements. But this one does. It feels formal enough but with a relaxed, contemporary edge that’s underscored by the soft, wavy hairstyle.

It may be oversized sequins and exotic leather but Grand’s look is basically a coat and boots. Can’t be beaten for a red carpet on a chilly evening in London.

Say what you like but you can’t beat a slim-cut tux and pants. Add accessories or keep it simple. Either way, it’s the best method to wow on red carpets, at parties and even in the office.

Proof That Age and Style Can Go Hand in Hand: Joan Burstein

3 thoughts on “Best-dressed at the British Fashion Awards: A very personal view”